The Weather in Nha Trang. Monthly Air and Water Temperatures

A journey to the beach capital of Vietnam, without any doubt, will become a memorable adventure in any weather nevertheless, it’s better for you to analyze a climatic map of the region not to get surprised by the weather in Nha Trang.

The Climate of Nha Trang

As some other resort towns, Nha Trang stands out due to its favorable climate. The probability of natural calamities here is lower than in many other places, the humidity is not so high, and consequently, the place has a bigger tourist inflow. The main difference between Nha Trang and other Vietnamese towns is a short rainy period – up to three months.

In Nha Trang, they distinguish two seasons: dry – from the beginning of a year and until the end of the summer, and rainy, including the autumn period and the beginning of the winter. The biggest amount of rainfall is in December, before this month rains are short and happen either in the evening time or by day. The resort owes its comfortable temperature to its lucky location: from the land side, it is defended by mountains, from the sea – by a chain of islands.

The Weather at the Moment

The Outlook for Three Days

If you’ve decided to visit Vietnam in the second winter month, you should take into account certain specialties of such a travel.

First, during all you stay, the weather is going to be gray, with all the shades of this color. The sun will break through gray clouds very seldom, though it won’t affect the temperature in any way. The average temperature level during this time is 26 C°.

But you shouldn’t be careless, so, for being on the safe side, it’s better to take with you not only summer things but also some warm clothing (light jackets, trousers, and sweaters). Having them, you’ll be able to walk comfortably in the town streets during evenings.

Second, try to book an individual room well in advance. And one of the main things is that you should morally prepare yourself to shell out for even most primitive services because the Vietnamese are trying to earn some extra money on the eve of their Vietnamese New Year (called TET) and make prices record-high.

Some widely spread illusions about opening the swimming season in January should be dispelled at once. In fact, it storms quite often during this time so you won’t be able to have a swim – the waves will knock you down.

The water temperature is still low and the air doesn’t make you feel like swimming. The weather is affected by the preceding steady rainy season that leaves some coolness behind. Furthermore, the January winds become a serious stumbling stone for a safe sea bathing. If it is the case, you should give preference to the beaches of Nha Trang’s surroundings –  “Doc Let”  or “Bay-Bay”.

In this month, it’s not warm enough yet, but it’s not cold either and the temperature begins to rise swiftly. A pleasurable coolness and bright sunbeams create ideal conditions for walks around the locality. The sky is clear without clouds and rainfall, though the sun isn’t able to warm up the sea for lovers of swimming yet. But during diving nobody will fell cold, that’s why most travelers prefer the pool to the sea.

The absence of a possibility to swim in Vietnam aquatic area can be made for with the appearance of an ideal tan on your body due to your long stay on the southern coast.

In a good weather, you can visit Yang Bay sanctuary for a change and feed crocodiles there or visit “Hon Ba” sanctuary, situated on a mountain with the same name near Nha Trang. An impenetrable darkness prevails there and a continuous line of impassable forests and misty horizons extends from edge to edge.

But the main reason for visiting Vietnam in February is the Vietnamese New Year called Tet Nguyen Dan. They also prefer to call it “A Holiday of Spring” and their Christmas tree – a blooming branch of a peach or a tangerine tree – symbolizes prosperity.

For maximum safeness, it’s better to prorogue traveling of a big family, especially with small children, for the spring. The number and size of sea waves will decrease. The air will get warmer enough not to catch a cold, and the rains will retreat for a long time giving the local people and tourists an opportunity to enjoy the warmth.

In March a season for diving starts (good visibility), though, on the whole, it’s still early for the water and the air to get really warm.

For sportsmen and romantics, preferring a solitary vacation, the endless chain of numerous archipelagos, scattered around the whole Southern-Korean Sea, becomes a favorite place. The picturesqueness of the landscapes takes the breath away and inspires many artists on creating matchless paintings. Besides, the favorable weather and the flecked with greenness mountains are a perfect and, above all, unpaid sedative and sleeping medicine. On-foot strolls are beneficial for health and help to work up a good appetite.

The freshness and tranquility of the spring season make your memories special. There’s a certain romanticism that comes with the middle of the spring and, perhaps, that’s why many people prefer to spend some time visiting Swallow Island by boat excursions.

At this time of year some weather changes take place, namely, the air humidity rises because of frequent rains.

The wet monsoon retreats giving the reins of power to the dry continental. You’ll dip into the atmosphere of silence and calmness. The surrounding greenness and quiet splashes of waves will fill your soul with peace and will leave pleasurable memories of your travel.

The spring period is most favorable for undergoing an intensive course of training in diving. Scuba diving lovers come from all corners of the world to observe and explore the beauty of the sea fauna.

Many diving centers are concentrated around uninhabited islands where the aqua area is populated with numerous kinds of wild fish and seashell. No wonder that the local people earn money not only on tourism but also on selling marine products: shrimps, lobsters, octopuses, cuttlefish and other inhabitants of the underwater world. It’s not difficult to find a “gravy train”. Tourists can try their fortune on one of the lakes or in the open sea on a yacht. On the way, they’ll have an opportunity to admire the loveliness of secluded bays lined up along the coast.

Exhausted after a long winter people are impatiently waiting for a journey to the wonderful country where they will find an excellent service and prepared with unusual recipes dishes. The blue firmament and the burning sun will bring joy to everyone who visits this faraway corner of the planet.

People suffering from cardiovascular diseases should better not plan a tourist journey there from June to August. During this period there’s a peak of unbearable heat in Vietnam which is contraindicated for people of this category. A cloudless sky and a burning sun is a tough experience meant for the toughest people. Small children and people with a weakened health will not like such conditions, but those who are not afraid of difficulties will see lots of interesting things unhurriedly exploring the surroundings, swimming in the sea and catching a tan on a sandy beach.

The overabundance of people in Nha Trang in July makes the town resembling a barrel of gunpowder that is about to explode. The heat doesn’t in the least affect the number of people eager to spend their vacation on the famous resorts. The guests are taken full care of by the staffs of hotels operating on the “all included” system and providing the vacationers with food, entertainment, and extra services.

An explosive mixture of the tropical heat and a higher than normal humidity makes being in the street extremely uncomfortable even for tempered tourists. August cannot be considered an acceptable month for visiting Vietnam. Before taking such a risky decision, one should think thoroughly.

In September, there’s a decline in tourist flow because of a worsening of the weather conditions. Long abundant rains and frequent storms become the main obstacles for a good vacation.

The air becomes less suffocating though the temperature invariably reaches the point above 30 degrees. Raincoats, umbrellas, comfortable clothes made of natural fabrics and waterproof footwear come to the rescue of the tourists. A steep fall in prices is typical for this month.

During this period tourist absolutely refuse to come to Vietnam because of the impossibility of splashing in the azure waters. The Idyllically smooth surface is spoilt by strong surfs and storms that become regular phenomena.

The weather in October is so unstable that it could be compared to a girl’s temper.

But if you decide to visit the resort not for swimming but for getting a chocolate tan than the low season will suit you perfectly.

The cultural life of Vietnam can be described as big, vivid and colorful. The hard-working people also loves rejoicing. Their calendar is full of holidays that depend on lunar phases and don’t have fixed dates.

The weather in the second half of autumn is extremely unstable so you won’t be able to get an accurate weather forecast even from the most expert weathermen. During this time the sun prefers to hide behind a dense veil of gray clouds. People get prepared for the rainy season, and if you don’t want to spend your vacation sitting within four walls, you’d better choose another month for visiting Vietnam or go to some other country.

You absolutely shouldn’t get upset if your vacation is in the rainy season and you’ve already bought the tickets. The mineral springs and healing mud lodes will brighten your mood. You’ll improve your health if you suffer from:

For more details read the article “What to do in Nha Trang while it rains”.

In December it’s not advisable to leave rooms without an umbrella and a light jacket which will make your walk before sleep more comfortable.

Taking into account all the above mentioned, a conclusion may be made that the ideal time for traveling to Vietnam, namely Nha Trang, is from February to September.

It’s vitally important to determine the goals of your travel. For those who can hardly withstand the heat, passive beach rest at the end of the winter – the beginning of the summer will suit. For diving, it’s optimal to go in summer. 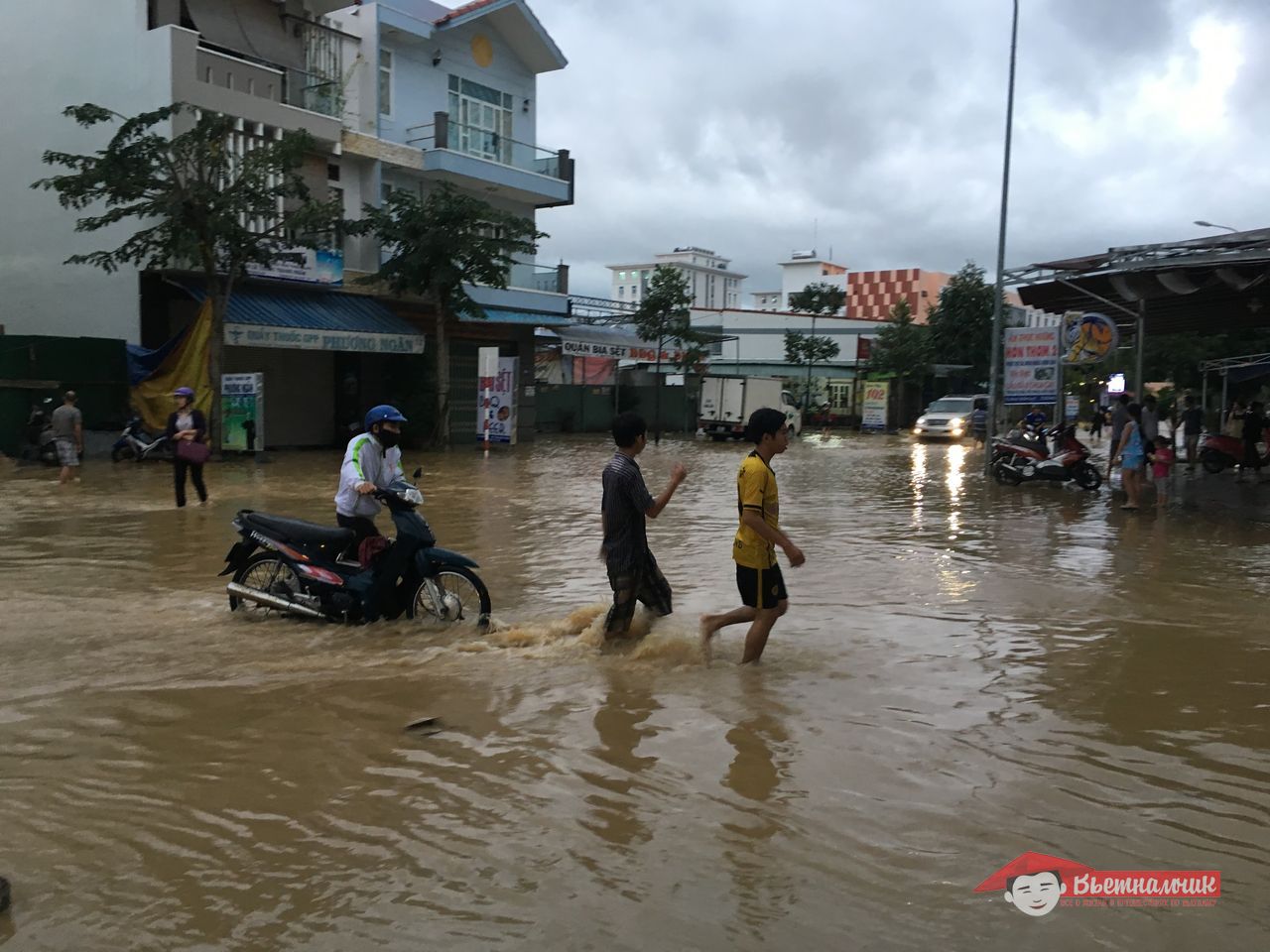 It’s not by chance that the positive people, full of energy and lighthearted joy, attracts thousands of foreign tourists all year round. The tourists also come to see the wonderful landscapes, the azure water, the snow-white beaches, and the vivid greenness of low hills and tropical islands situated in the middle of the bay. The main magnet attracting young people is the boiling nightlife of the town, luxurious restaurants, atmospheric cafes, and unusual clubs.

All of the above makes a perfect resort and a comfortable place to rest.

Such opportunities won’t leave any tourist indifferent. Don’t believe? Then you are invited to see for yourself the absolute uniqueness of Nha Trang.

And in addition, a short video for you to see what the rainy season in Nha Trang is and what to expect.