Dragon’s Labyrinth, the Coral Pagoda of the Cleansing of Sins and Pearl Beach are not a common excursion, but worthy of attention. Suitable for those who want to play in contrasts, because during the trip tourists will see hell through the eyes of the Vietnamese, and then plunge into the sea in a heavenly place – on the Pearl Beach.

Today, not all travel agencies offer an excursion to the Coral Pagoda and Pearl Beach. It is necessary to clarify in advance with your agent, perhaps they have this tourist itinerary in stock.

In addition, to get to the Coral Pagoda Tu Van (Tu Van) can be on the “bike”, rented it.

Read more in our article: Rent a motorbike in Vietnam.

Rent a moped is not a big deal. As a rule, this service is provided in almost every hotel in Nha Trang. The cost of one day use of transport will cost 100-150,000 WND plus gasoline, which will have to be poured independently (22-23,000 WND per liter).

A warning, which should not be neglected: the traffic on the roads of Nha Trang is just crazy! And it is not just words. Most “Vietov” ride exclusively on mopeds, as the most affordable form of transport for relatively poor people. And there are practically no rules on the roads.

For example, if a pedestrian wants to cross the road, he must raise his hand up and just walk – his mopeds will simply go around. But cars are unlikely … There is a lot of fuss on the roads of Nha Trang – the sounds of horn are constantly heard. Therefore, if you are not confident in your abilities and that you can react correctly and orient yourself on the road, then it’s better NEVER Do not take a “bike” for rent. Never! For your own safety.

The pagoda itself and the pearl beach are in the area. Cam Ranh Airport. It will take about an hour by car from the very center of tourist Nha Trang. But it is better to use the services of travel agencies and just go on a trip.

The first thing that tourists see when approaching the Tu Van Pagoda is a boat. She will stand at the entrance. According to legend, with the help of her Buddha carried the righteous people through the ocean of suffering. It is curious that the pagoda of the Cleansing of Sins (Tu Van) began to be built in 1968, and they passed it in 1995, when the Coral Tower 40 meters high was completed. The two-storey structure of the shells of mollusks is listed in the Vietnam records book as the tallest building created in a unique architectural style. 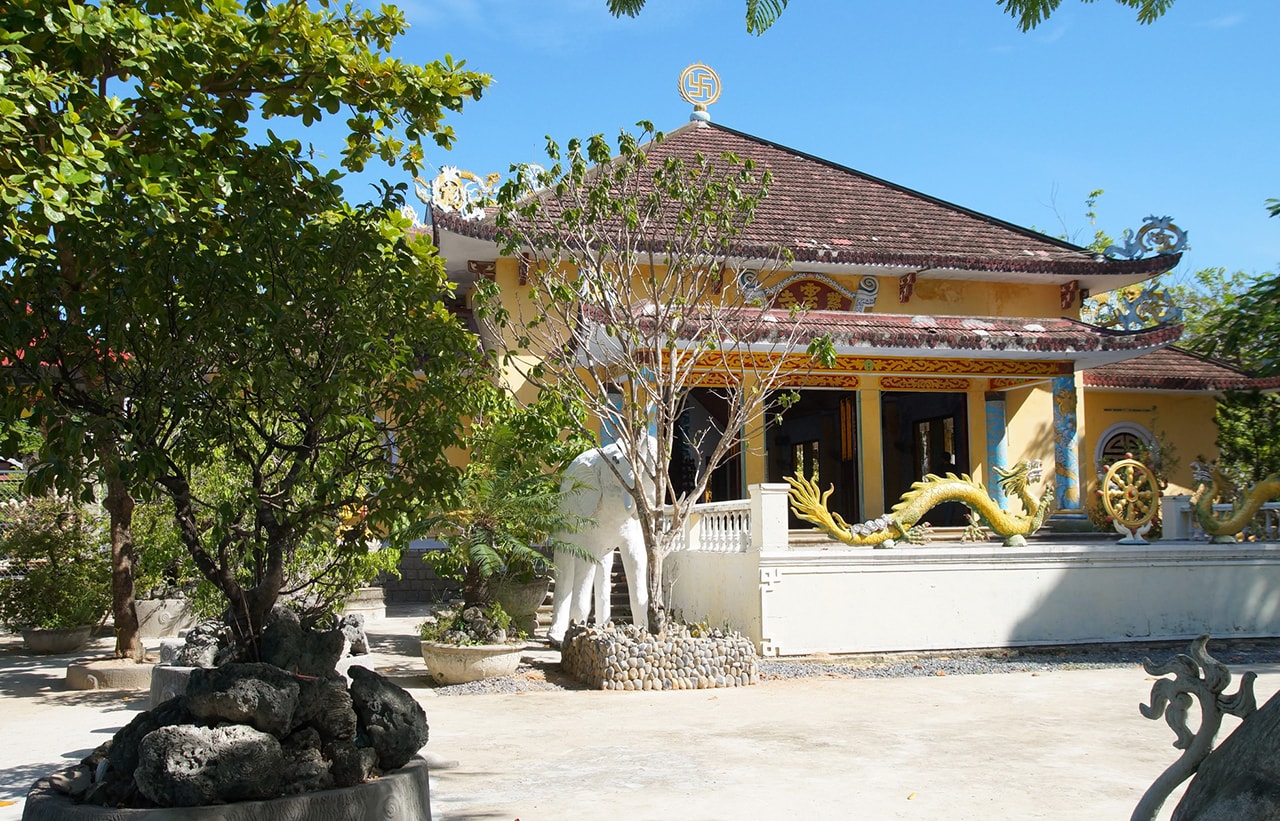 Also on the territory of the pagoda of purification of sins, tourists can see a unique tunnel in the form of a dragon decorated with shells. Although it is called a labyrinth, it is unlikely to get lost there. But the Vietnamese believe that the 550 meters that they will have to overcome there are 18 laps of hell. Having passed them all, the soul of man is purified. Usually at the entrance to it, which is from the tail of the dragon, everyone who wants to clear the soul of sins is given a candle. Not superfluous to take a flashlight with you, because in the tunnel it will be quite dark, crowded and low in places. But after going through the circles of hell, a man comes out of the dragon’s mouth and, in the language of a mythical creature, as if on a hill, returns to the “real world”.

After cleansing from sins, it’s time to go for heavenly pleasures – to the Pearl Beach. From the pagoda, it is located about 20 kilometers in the national park.

Place – very beautiful and quiet. There are not many tourists there, which for many will seem a plus. The sea is calm here, and quite comfortable on the shore – there are sun beds and umbrellas, a shower and a toilet. And very close – a cafe with quite affordable prices.