Cathedral in Nha Trang: a vivid manifestation of Vietnamese Catholicism

Approximately 8% of the Vietnamese population still adheres to Catholicism. This remarkable fact is explained by the colonial past of the country – – in the era of French Indochina, almost all of South Vietnam was Catholic. The Cathedral of St. Mary in Nyachang is one of the current strongholds of Vietnamese Catholicism.

Brief History of the Cathedral

The Catholic Cathedral was founded in Nyachang in 1928. It was decided to build a temple on the top of the hill, for which the rocky summit was blown up with the help of mines and leveled. In total, about 500 minutes were spent. On the formed flat area of ​​4.5 thousand square meters. m and laid the temple, the construction of which took almost 5 years. 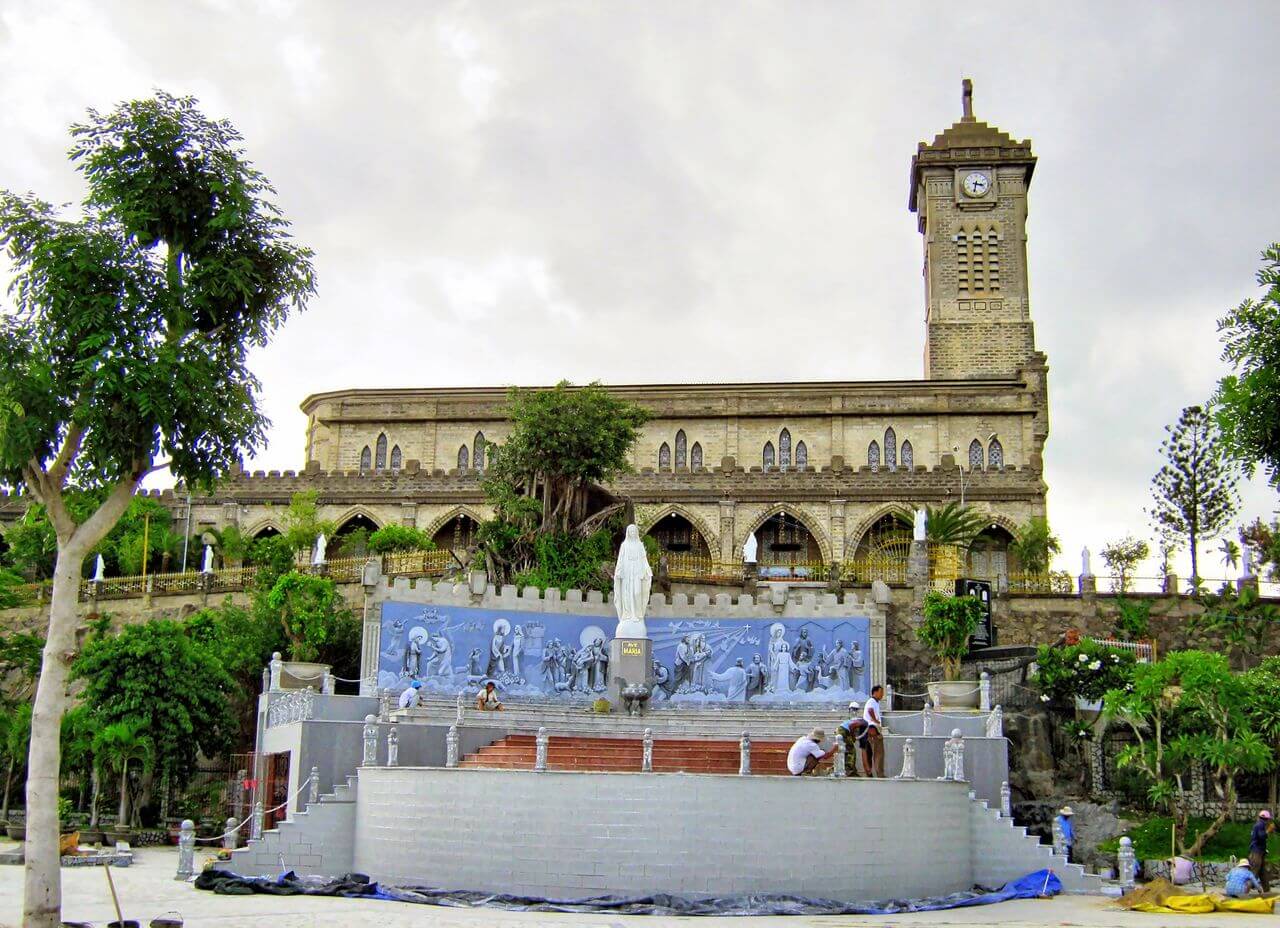 At the end of construction started its design. First of all, huge stained glass windows made of fragments of multi-colored glass were installed. The workers then installed 3 large bells, cast in France in 1789, in place. The design was started in early 1934, and in July of the same year a solemn consecration of the cathedral took place. The ceremony of consecration even held again after 6 and a half years. The recognizable clock on the main tower was installed on the existing church at the end of 1935. 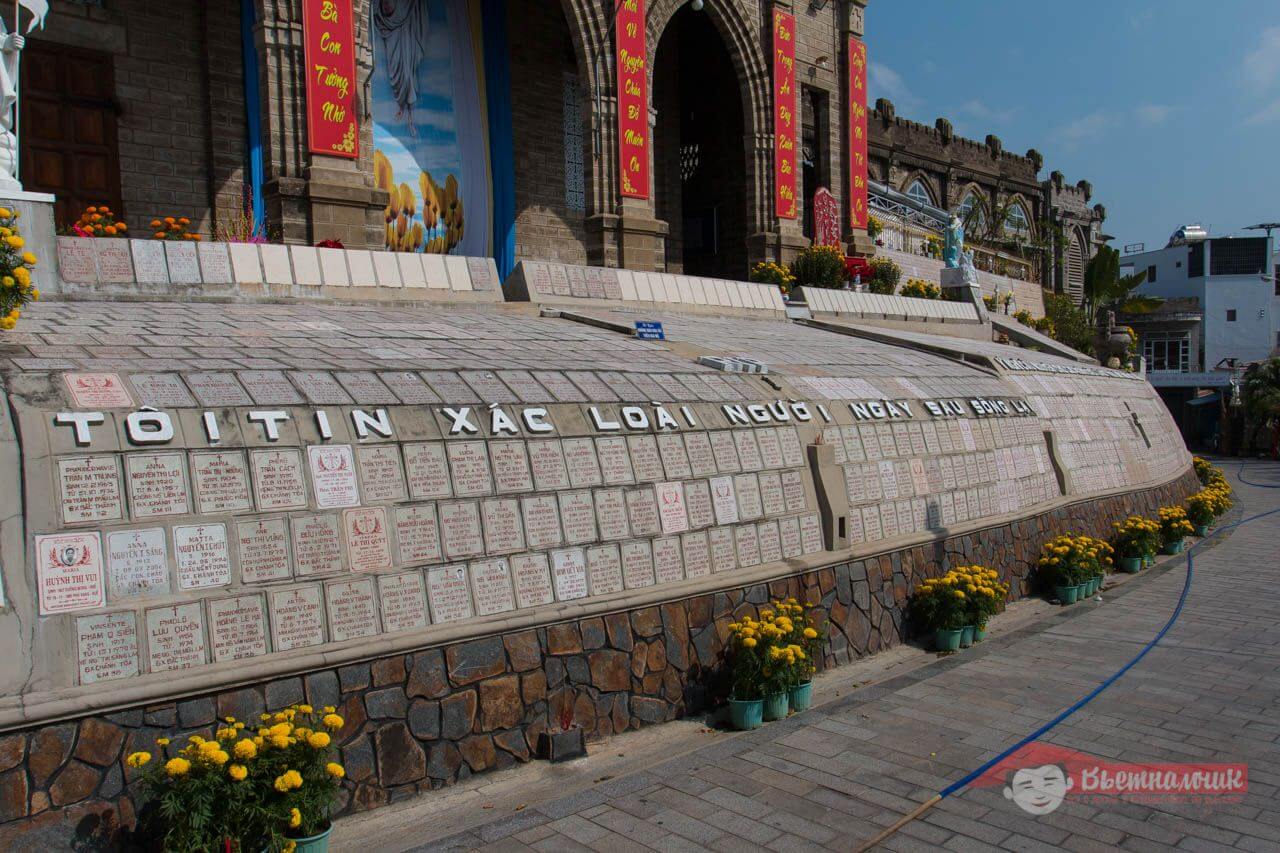 The area occupied by the cathedral was about 720 square meters. Initially, a cemetery was placed near the temple, however, due to the construction of the railway station in Nyachang, the cemetery was removed, and the remains of the graves were placed in the niches of the cathedral.

The Catholic Cathedral in Nha Trang as It Is

The building of the cathedral in Nha Trang can be seen from any end of the city – – to place the temple on a hill was not a random decision. In addition to being the most prominent building in the city, this temple also houses the residence of the bishop of the Catholic Diocese of Nha Trang. 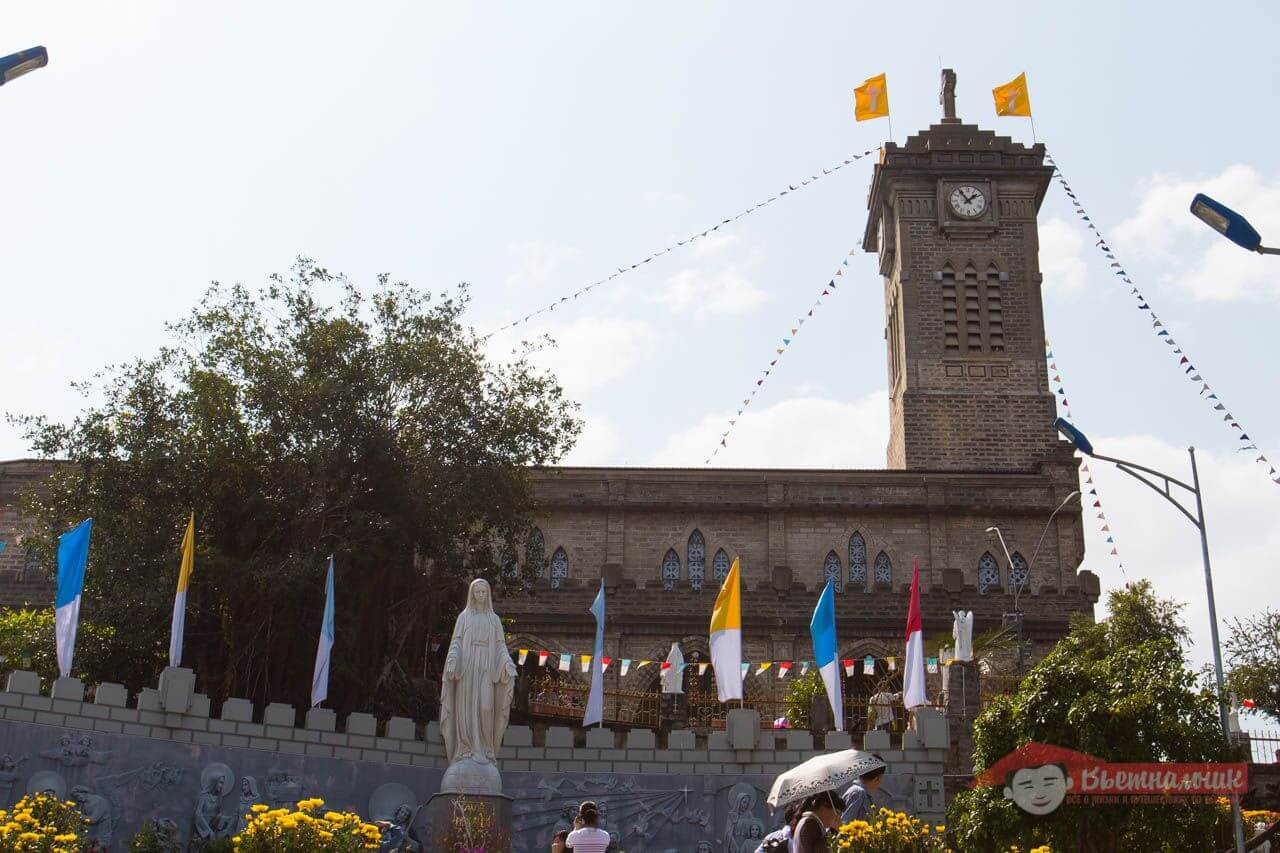 The Cathedral of St. Mary was built in the Gothic style. The most prominent element of the cathedral is the 38-meter square clock tower and a large Catholic cross. Monumentality of the cathedral adds concrete and cement slabs, from which the building was constructed. 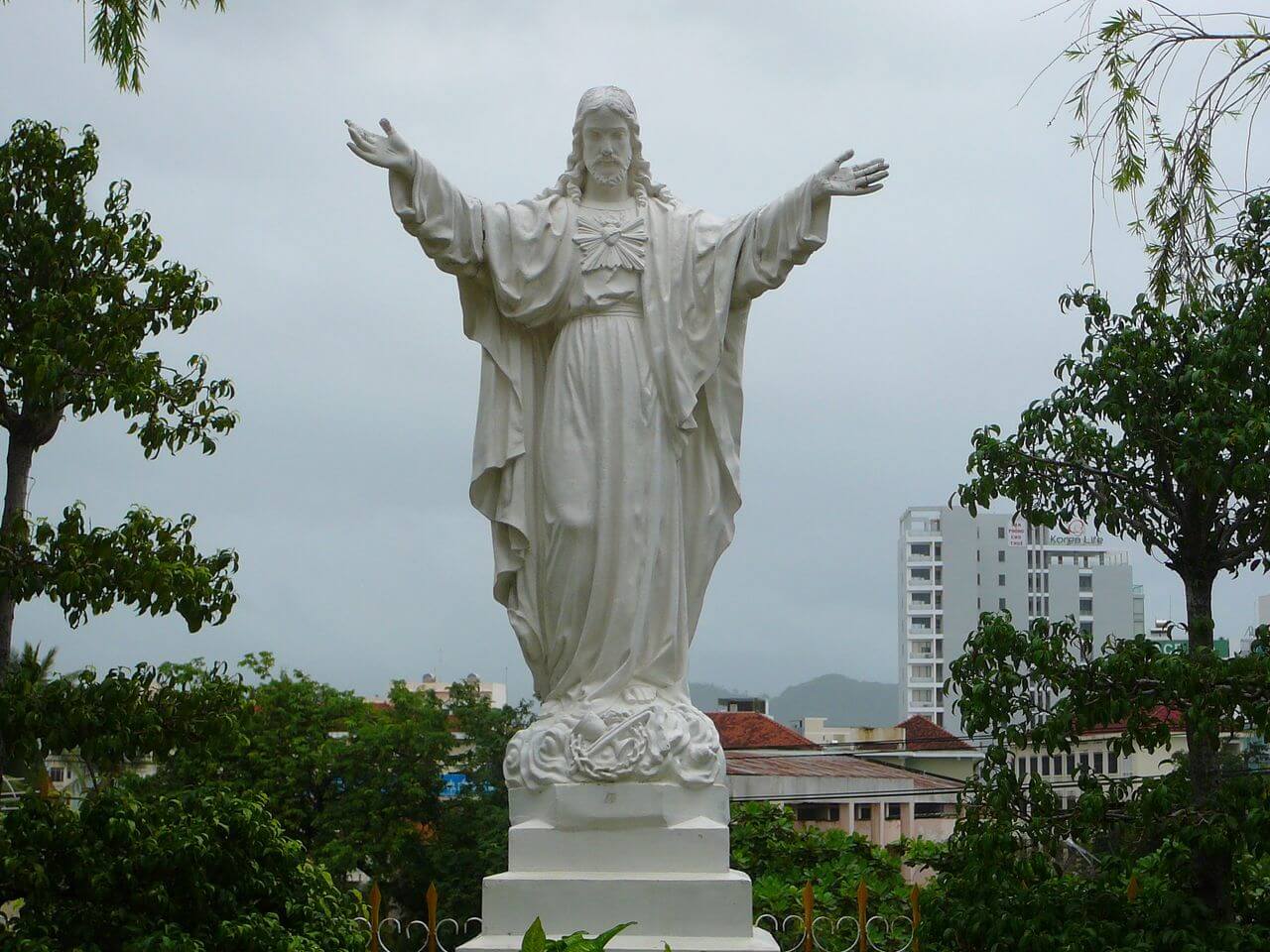 Inside the cathedral is no less impressive than the outside. It is very unusual that the inner space is decorated with fresh flowers. Sunlight penetrates through the stained glass windows and colors the interior with bright colors. 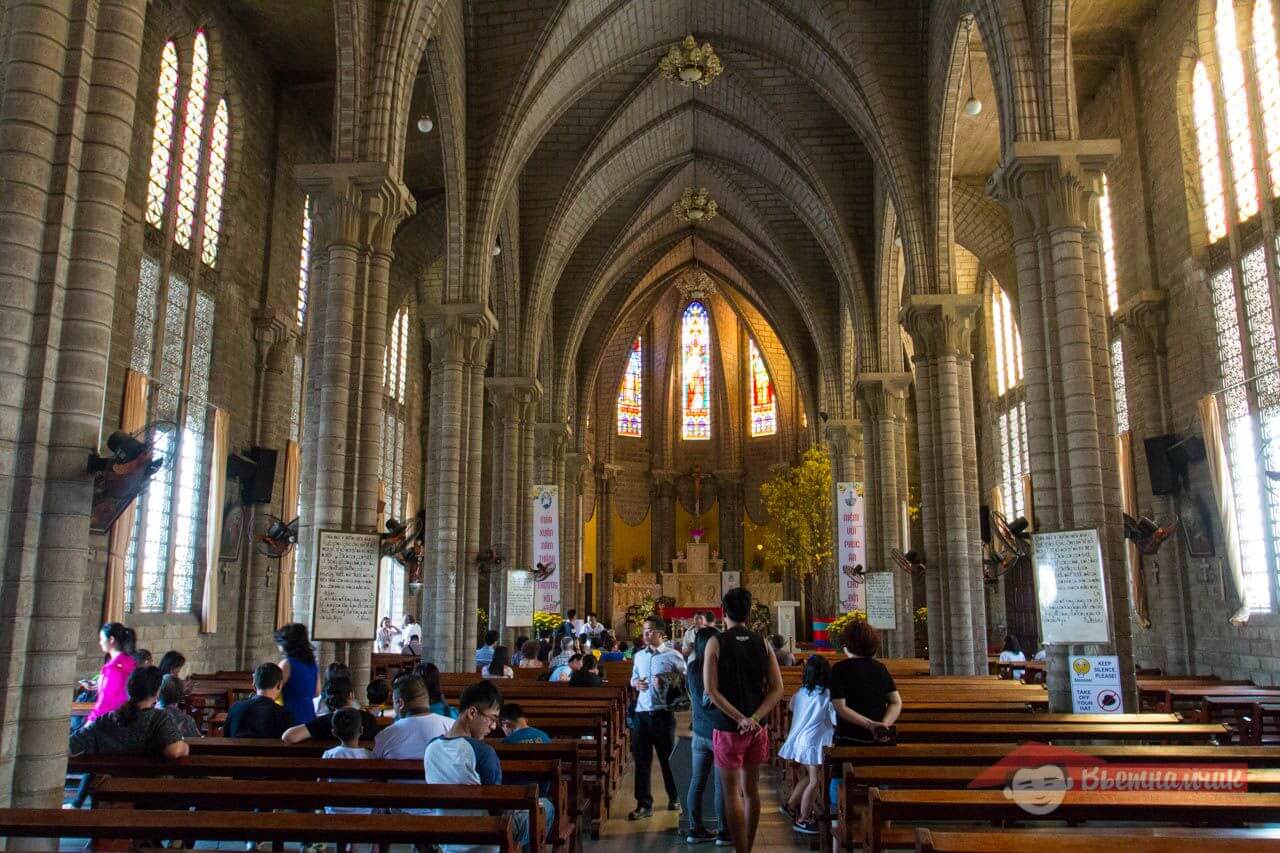 The mosaic stained glass windows describing biblical scenes themselves become even more colorful. The wall, in the niches of which the remains of the deceased from the former cemetery were reburied, is decorated with memorial plates. 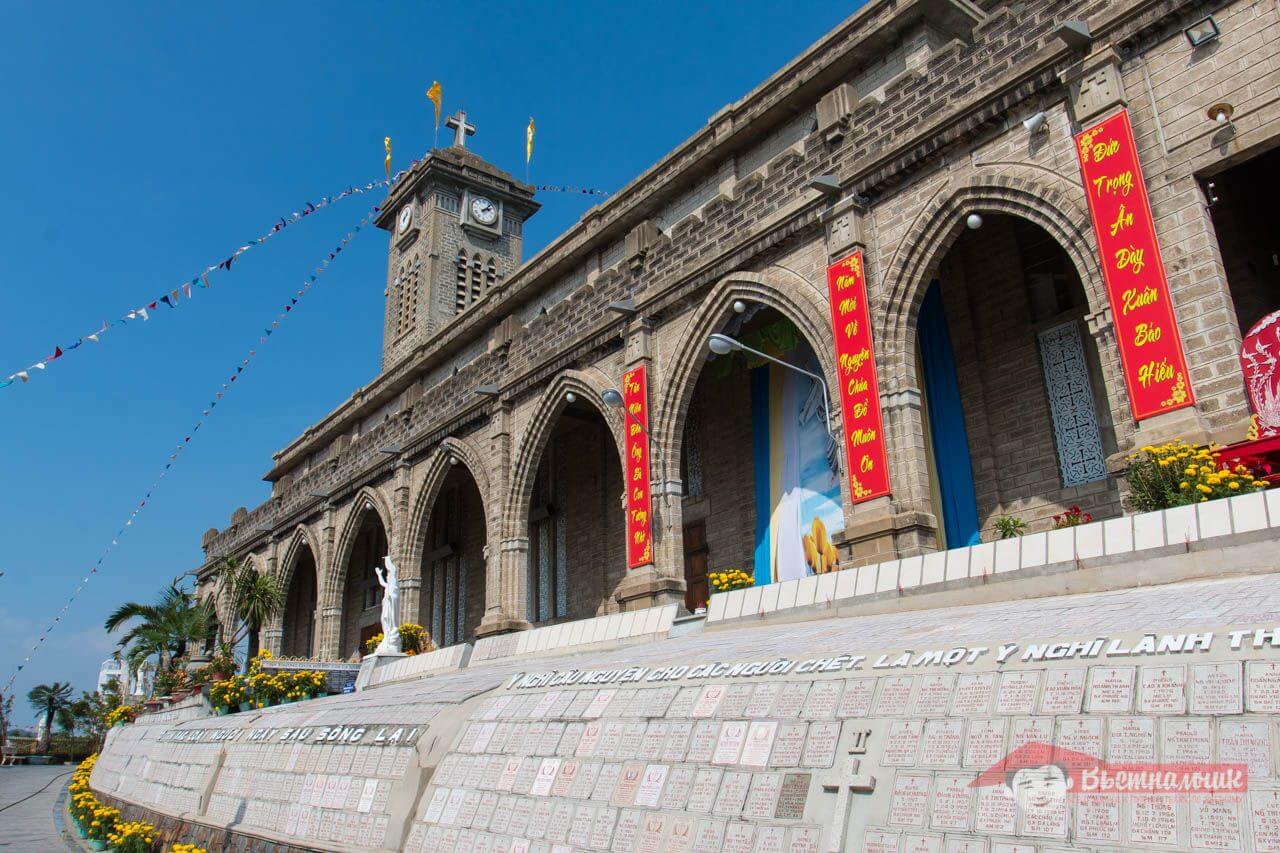 Outside, in the courtyard opposite the cathedral, there are statues of Jesus and the Virgin Mary, surrounded by many chrysanthemums, and statues of saints are organically arranged along the perimeter of the temple. Behind the statue of St. Mary is a biblical legend, located next to a small altar. 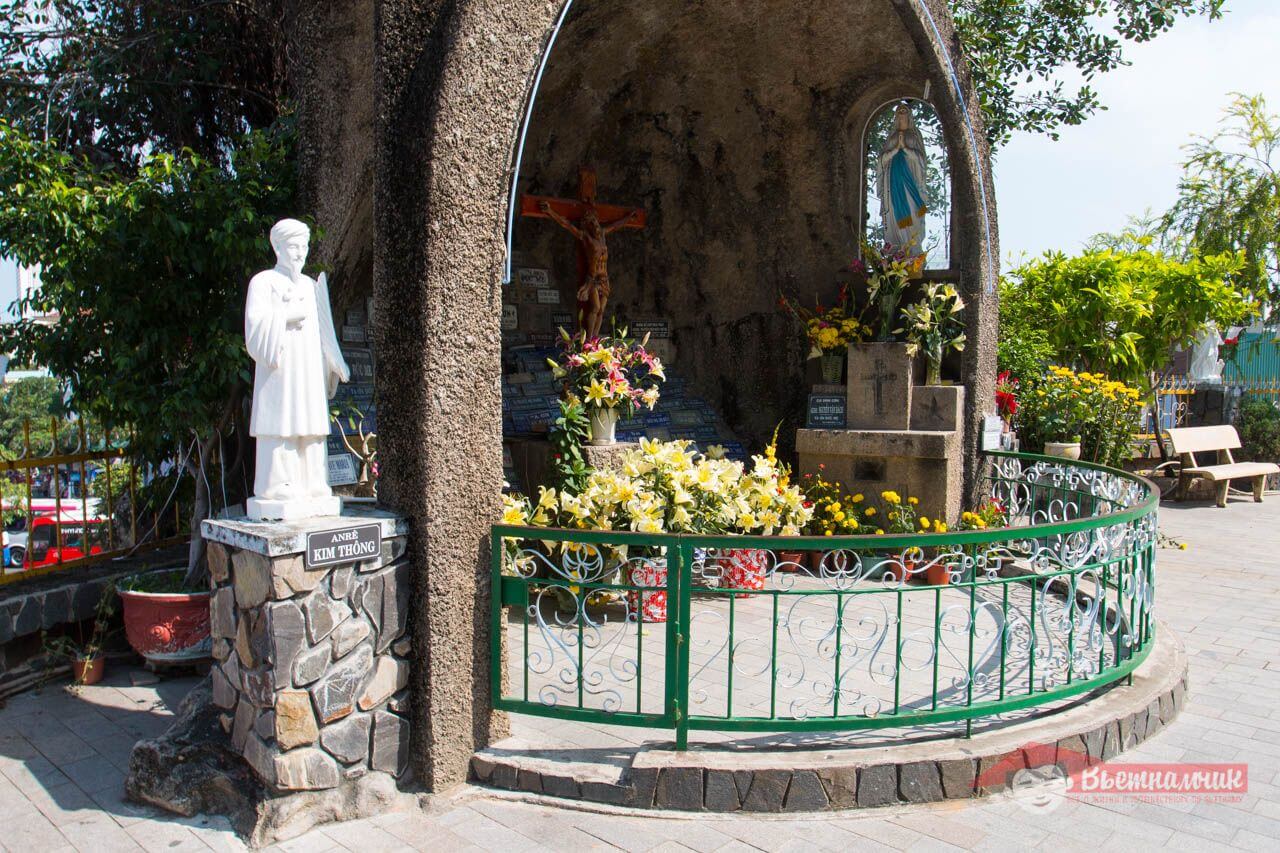 Benches were prudently placed throughout the complex, so that tourists and believers could rest.

The cathedral is active, it is actively visited by Nha Trang Catholics and tourists. For many tourists visiting it is a must-see point. Usually for such a tour will take no more than 20 minutes. Church services are held in Vietnamese twice on a weekday, and on Sundays the number of services increases to five.

Why is it so attractive?

Thanks to its dominant location, the Catholic Cathedral in Nha Trang really attracts the attention of tourists and is able to surprise everyone who did not expect to see the island of Christianity in the midst of prevailing Buddhism in Indochina. We will try to briefly review what is the main reason for the Russian-speaking tourists’ cathedral to be surprised. 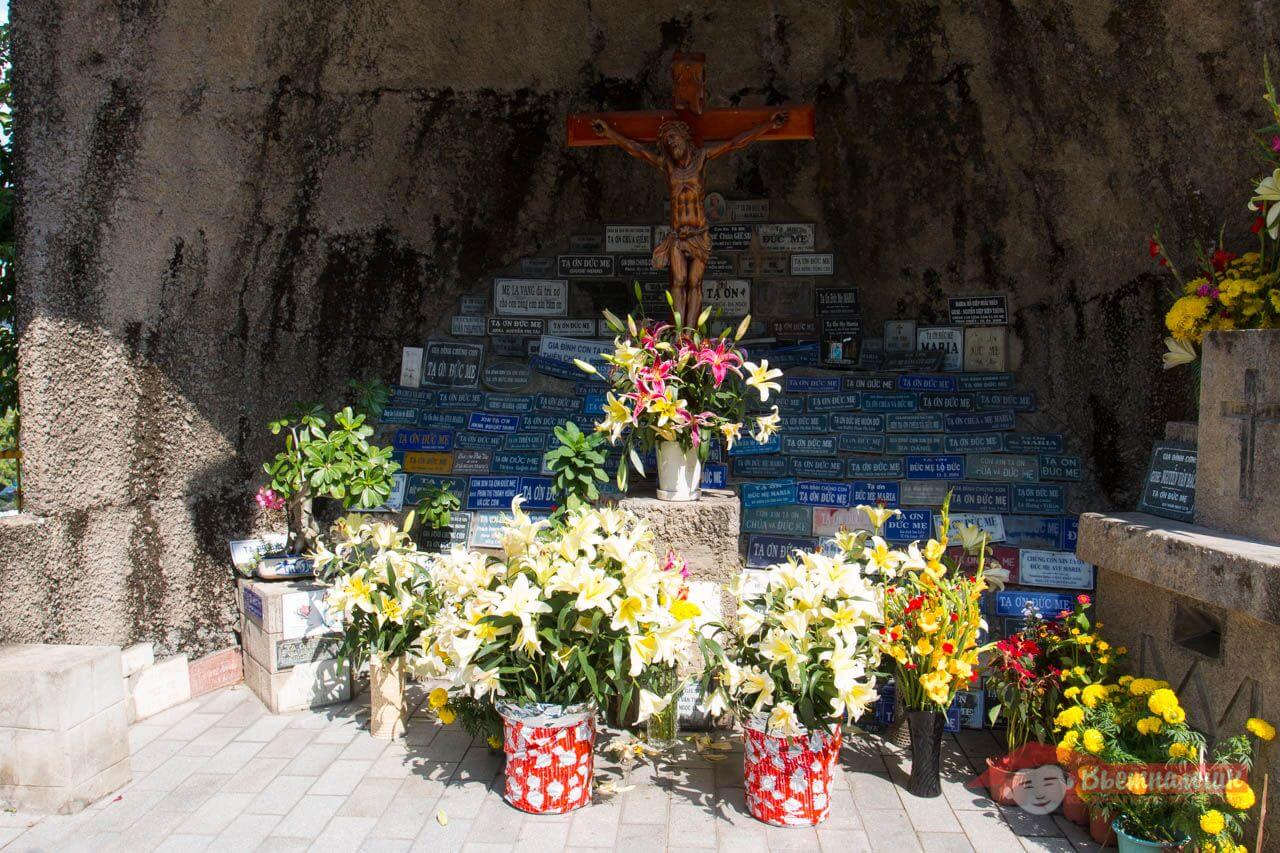 Of course, people immediately notice his tower with a clock and a crucifix. People are fascinated by its slightly gloomy and majestic gothic appearance. The interior of the building is striking in its scope and at the same time with a certain airiness, an abundance of light and colors, which is not always typical of European Gothic temples.

Judging by the impressions of visitors, you can visit the temple in any weather – both in sunny and overcast (which is more often in non-seasonal months in Nyachang). When it is overcast on the street, the impression of the external monumentality of the cathedral is even intensified.

How to get there?

As it became clear, it is very easy to find this cathedral in Nha Trang. Getting to it is no more difficult, since the cathedral is located in the very center of the city, next to the railway station. From the tourist area of ​​Nha Trang can be reached on foot, it takes up to half an hour. From the “Lotus” from the beach also leads a direct road to the temple.

If you do not want to take a walk, you can take a taxi – – it will cost no more than 40 thousand dong. Next to the cathedral the shuttle bus number 4 also stops. Traveling in Nha Trang city buses costs 7,000 Dong. 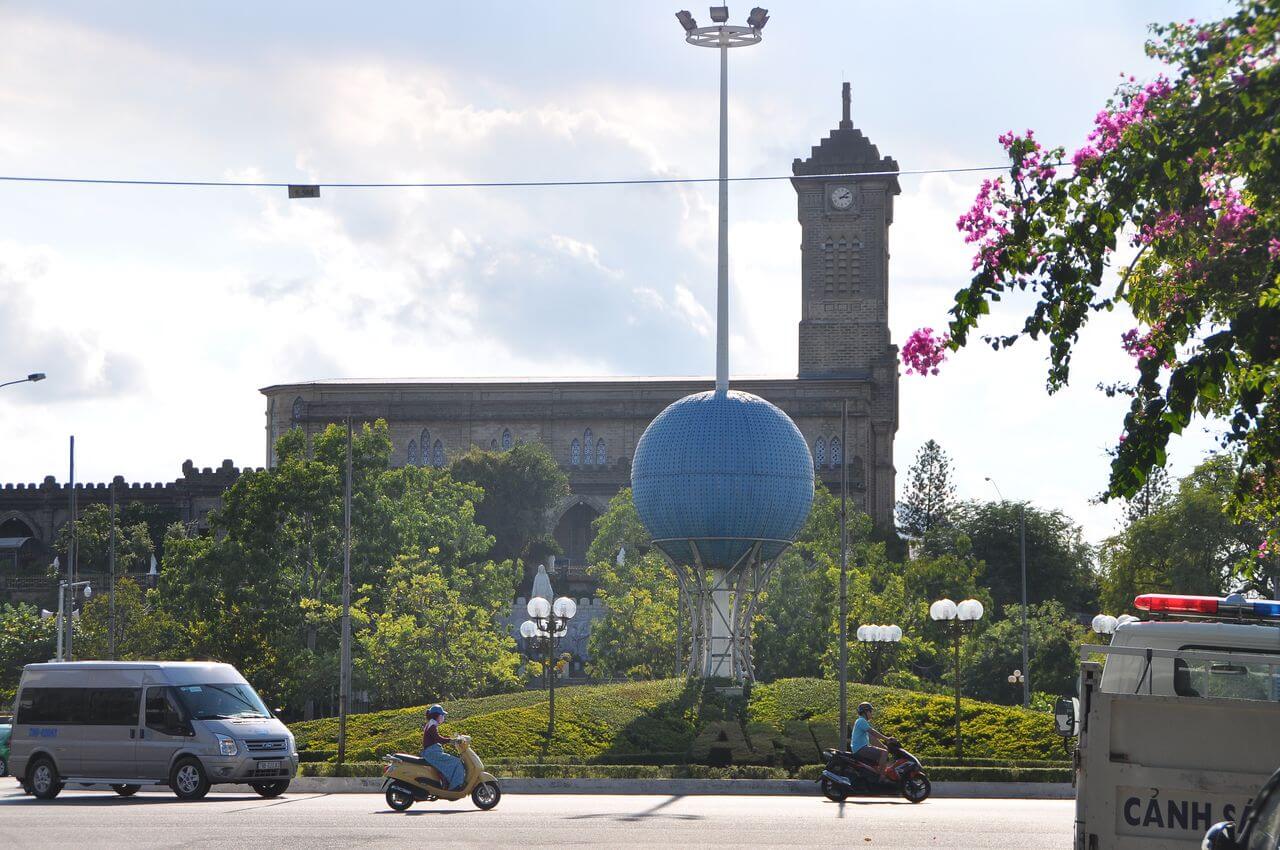 Renting a bike, you can get not only to the territory of the temple complex, but even to park at the main gate itself, having swept the garden through the arch, past the statue of the Virgin Mary.

Access to the inspection of the cathedral is open at any time, but you can go inside only at certain hours when the service is held there. Hours of service is better to specify on the spot.

It happens that the main gate is closed. In this case, you can enter through a secondary entrance located on the side. Combine a visit to the cathedral in Nha Trang, you can trek to the pagoda “Long Sean”, which is located nearby.