Amusement park in Vung Tau: rest in the style of “Coming back to the USSR”

In the south of Vietnam there is a town that can hardly be called a significant resort center. Having celebrated its eight hundredth anniversary in 1996, the city seemed frozen at the crossroads of centuries. The first known name of the city – Chan Bo, in the XIII century, the Europeans called it the Cape of Saint-Jacques, now it is known as Vung Tau. The population (16 blocks and the village of Longshon) is slightly less than 500,000 people, the town is cozy, but not pretentious: there are no large shopping centers, large restaurants and significant attractions on a global scale. But in Vung Tau there is a park Ho may – A place for a wonderful holiday with children.

In the park “Ho Mei” it seems that you are transported to the times of the USSR: simple but cute rides, ostriches and horses, playgrounds and carousels. The park is located on Mount Nuilon.

Park Ho Mei: how to get, price per visit

There are three ways to get into the park: on foot, by taxi and by cable car. The first way is for adult lovers to climb the mountain, the second (taxi) costs about 116,000 VND (US $ 5). The third one (on the funicular) will allow you to admire the wonderful panoramas of the city during the ascent. Cable car cabins and all equipment are modern and completely safe.

The cost of a seat in the funicular booth depends on the age and height of the passengers. Small children travel for free; for those that are older and grow from 100 to 130 cm. Adults must pay twice as much. The price includes delivery by cable car to the park and visits to all attractions. You will have to pay in addition only for food in cafes, drinks, souvenirs and feeding of Arapaima fish. 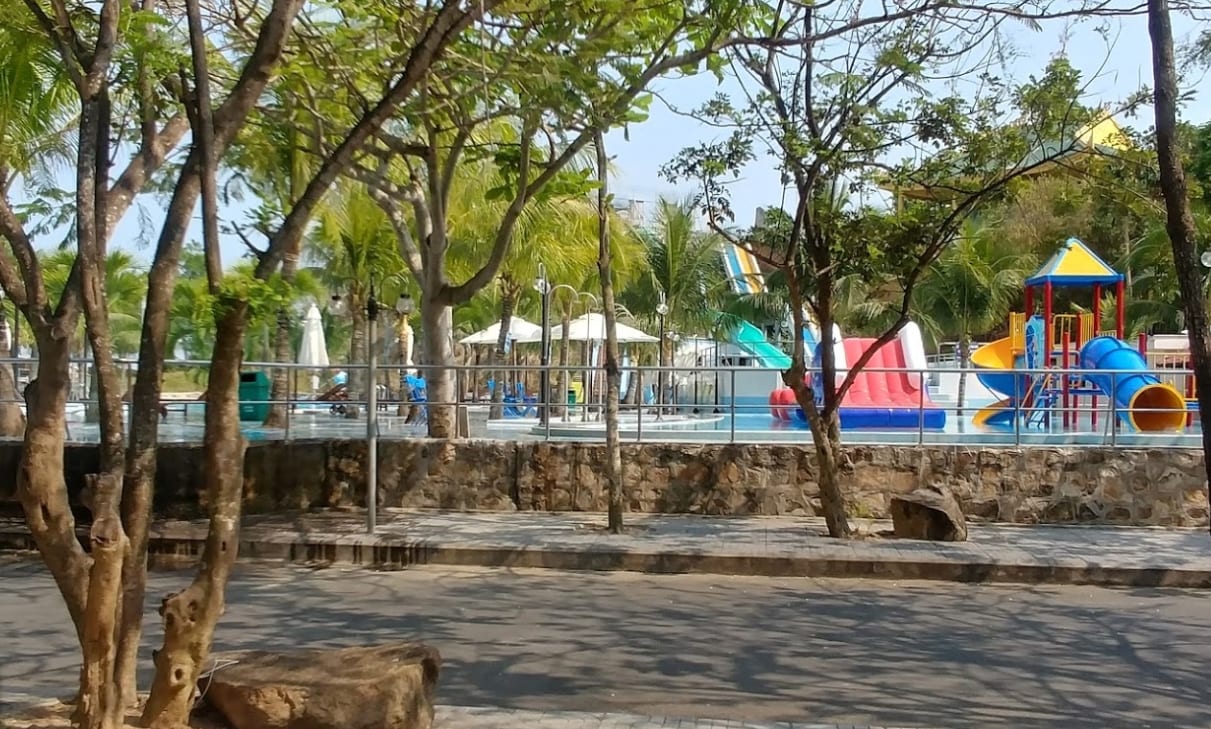 On holidays, tickets are 30% cheaper, but there are more people these days – the local population likes to take advantage of discounts. Before boarding the funicular, a brochure with a park plan is issued free of charge.

What can be visited and seen in the park

View the map in full size by the link: map.

Walk “in the style of the USSR” begins at the exit of the booths. Before the entrance to the park visitors will deliver a mini-train with a train. This train runs throughout the park, if you wish (and the ability to sit astride) you can ride a horse everywhere. 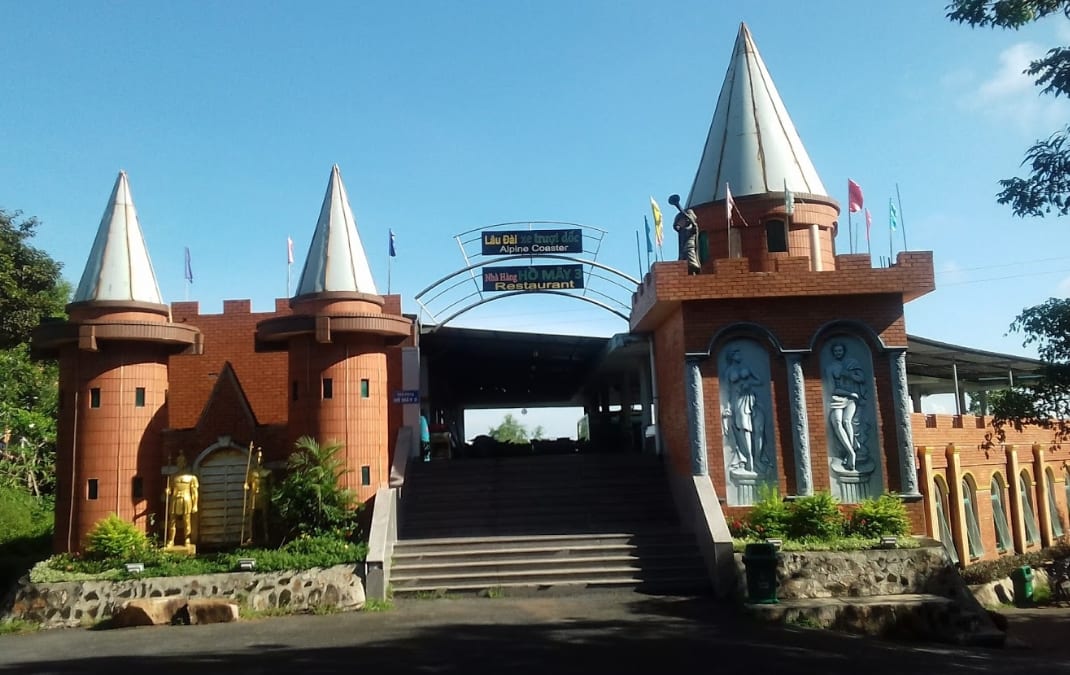 Children will be interested to ride on the carousel (rope, circular with booths) and the boat. It is exactly what it used to be in Soviet parks, it even squeaks “in a Soviet way.” There are playgrounds for small ones with mini slides and a sandbox with toys. On the carousel for kids adults will not be allowed. But fastenings and a condition of attractions are regularly checked, repair is carried out.

In the park there is always a queue for the Alpine coater ride, similar to a roller coaster. The machine for two is descending from the mountain on a winding rail track, the speed of the descent is regulated by the passenger who sits behind. There is a point on the track where everyone is being photographed, this photo can be bought back after 10,000 dongs. 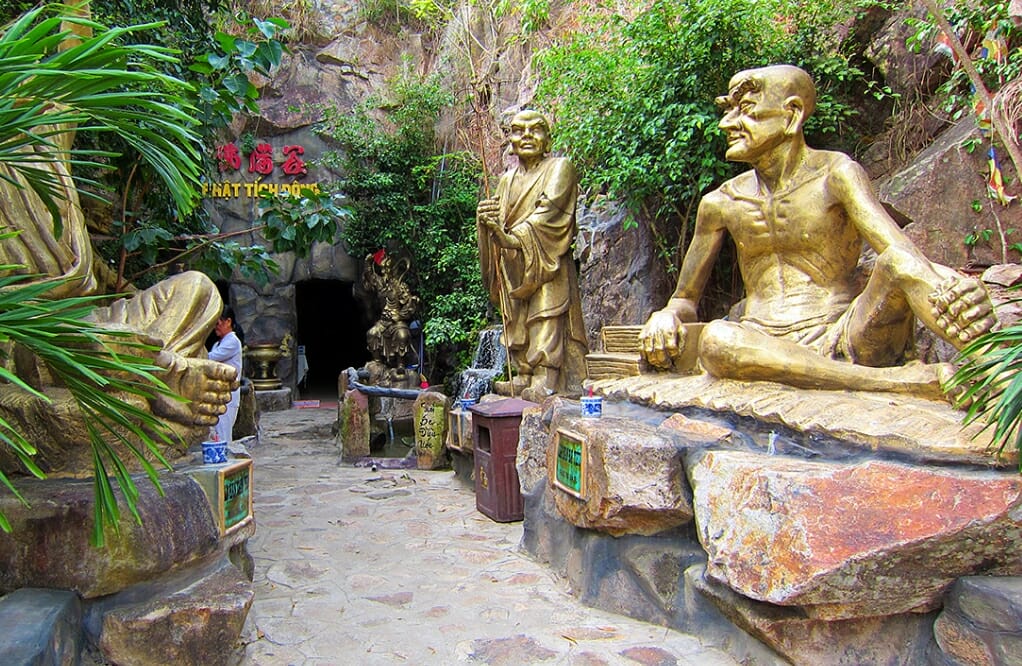 For lovers of fauna there are areas with animals. You can look at ostriches and horses, there are sheep and goats, peacocks and porcupines. There are many monkeys in the park, there are several species of them, and wild boars from the wild fauna. In the gardens there are cages with chickens, pheasants, eagles, a pavilion with deer. Fans of the flora can see the garden with orchids and vines.

All of the above is free, but one communication with animals is paid (10,000 dong), and it’s worth it. Arapaima with a fish with a bait attached to it is beside a lake with fish, you can throw a fishing rod and lure the largest freshwater fish in the world (as written on a poster by the lake). The impression of a two-meter monster floating on the surface is unforgettable. 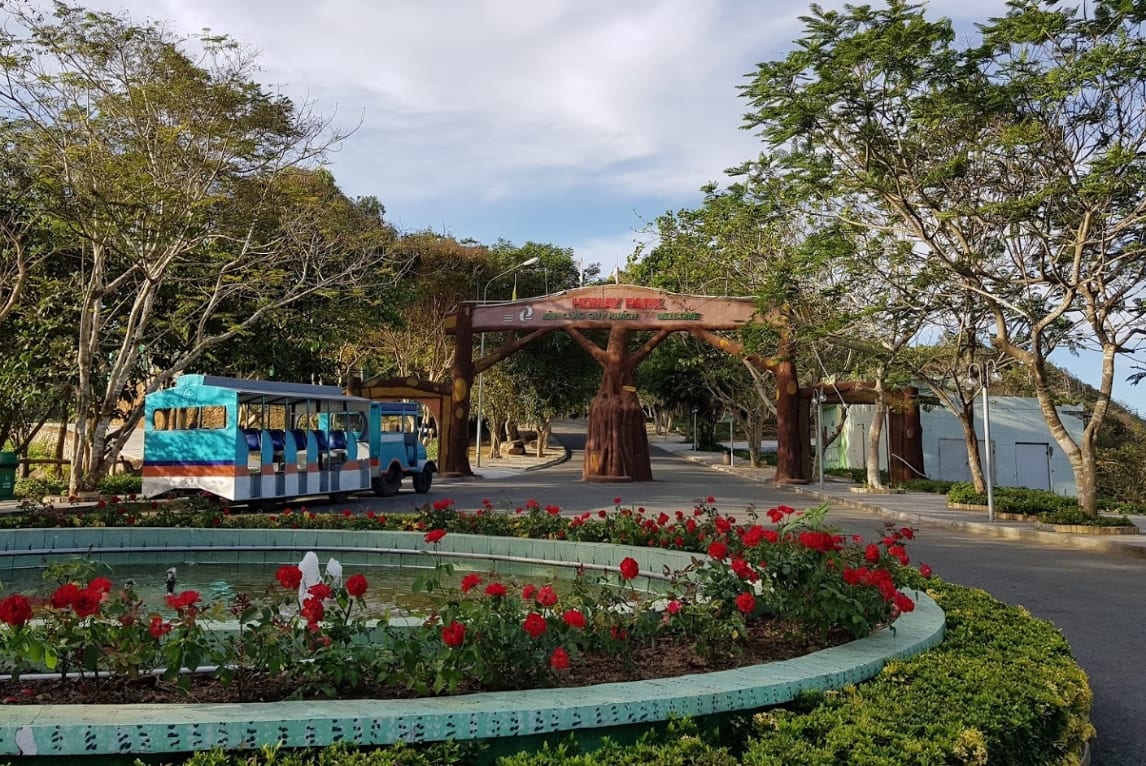 Of the water activities in the park – slides, adult and children’s pools, the last allowed with their parents. Children’s pool is shallow, adult is deep enough, both with changing rooms. Two small lakes – with clear transparent water, one of them has a waterfall with a statue of Buddha. It offers entertainment “tumbling in the ball”: in an airtight round container, turning over with your hands and feet, you move along the surface of the lake.

Karting – separately for parents and small, in the second typewriter smaller. Extreme lovers go down the zip-line on a steel rope. The zip-line equipment is checked every day, and helmets are issued for those who want to go down it. 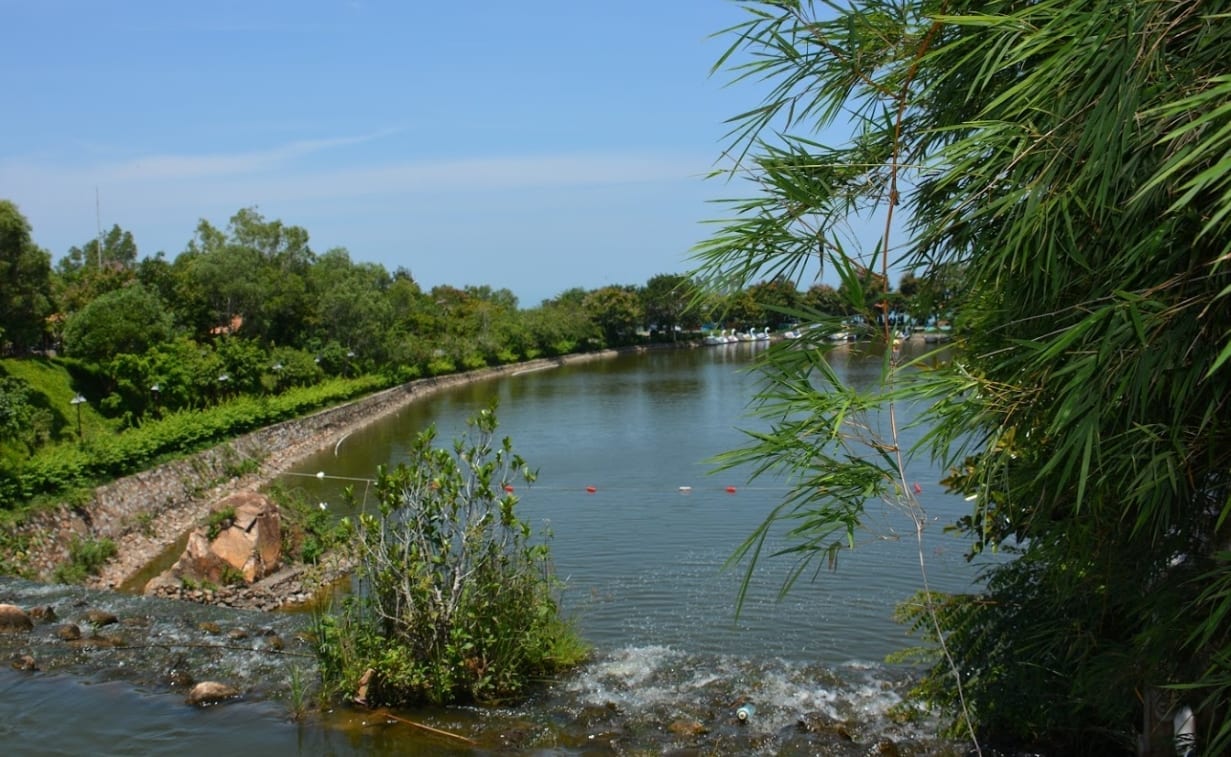 Before the New Year, a plaster decorated statue appears in the park – Santa Claus with deer. In the absence of snow and cold, this group of figures looks a bit out of place, but funny. Another interesting place with statues – “Lovers’ Park”, stylized as a biblical storyline. Adam and Eve, surrounded by exotic flowers, stand under a tree covered in vines.

Big Glade, which is called the “sculptural forest”, is lined with statues of Buddha of various sizes, there are more than twenty of them. There is also a covered mini-cave with this deity – it has many figures and Buddha images on the walls. After passing through the cave, tourists find themselves on the site with the largest statue of Buddha in the park, it can be seen from anywhere in the city. There is also a pond with multi-colored carps, tourists are allowed to throw a coin at it for good luck. 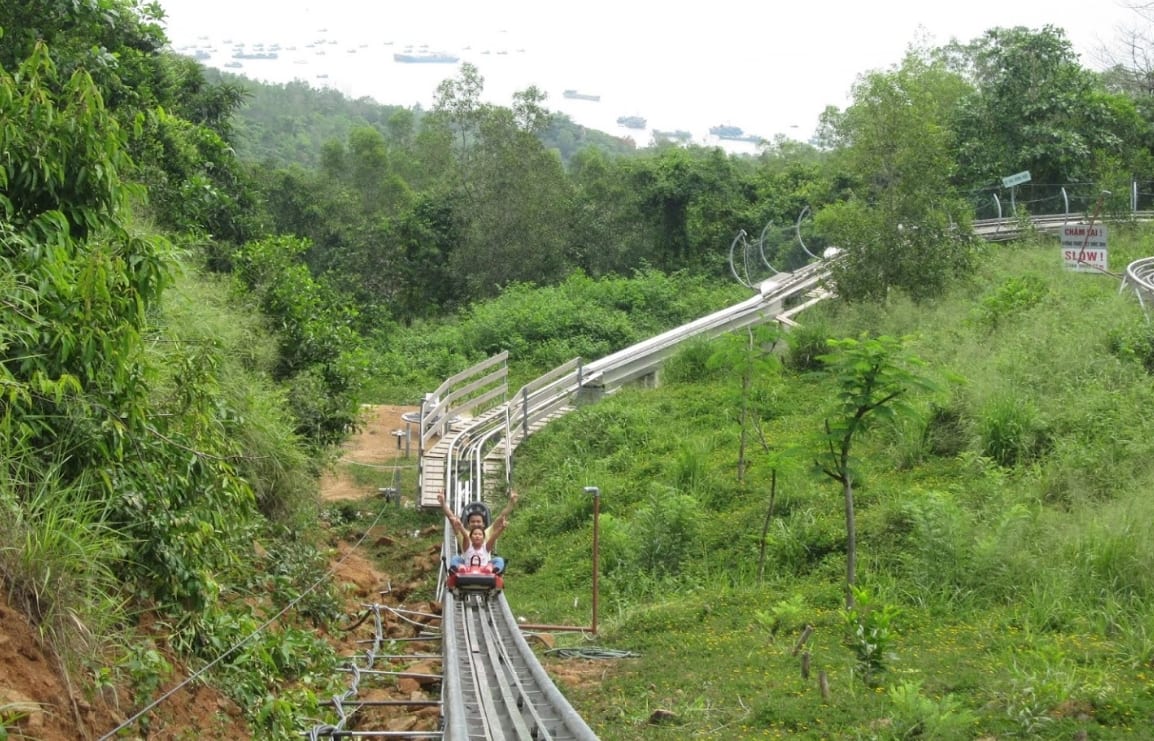 Some attractions look outdated, but this retro-atmosphere is nice to visitors – it seems to endure the good old days. The park staff speaks English, all employees are attentive and polite. If the day was not enough, you can spend the night in a small hotel in the park (pay separately). For those who want to eat there is a restaurant overlooking the sea, and on the left side of the park there are several cafes in the style of sea-food.

Beaches Vung Tau: how to choose the beach to your taste and preferences?