The Linh Phuoc Pagoda in Dalat can, in a good way, be called Disneyland Pagodas. There are so many magnificent sights in one place that it will stagger you just as if you were in an amusement park.

For Linh Phuoc has long been entrenched the right to set national records – the largest bell in Vietnam, the longest glass dragon (49 meters), the tallest statue of Quan Am Bodhisattva. The list can still go on and on. There is even an informal name – “Temple of a Thousand Dragons”. And it is already perceived as a given, that the sculptures here are more beautiful than in other cities, thanks to the unique mosaic architectural style – they are made of glass and ceramic fragments. Yes, you yourself see this as soon as you turn into the alley, which will lead you to the entrance to the pagoda. 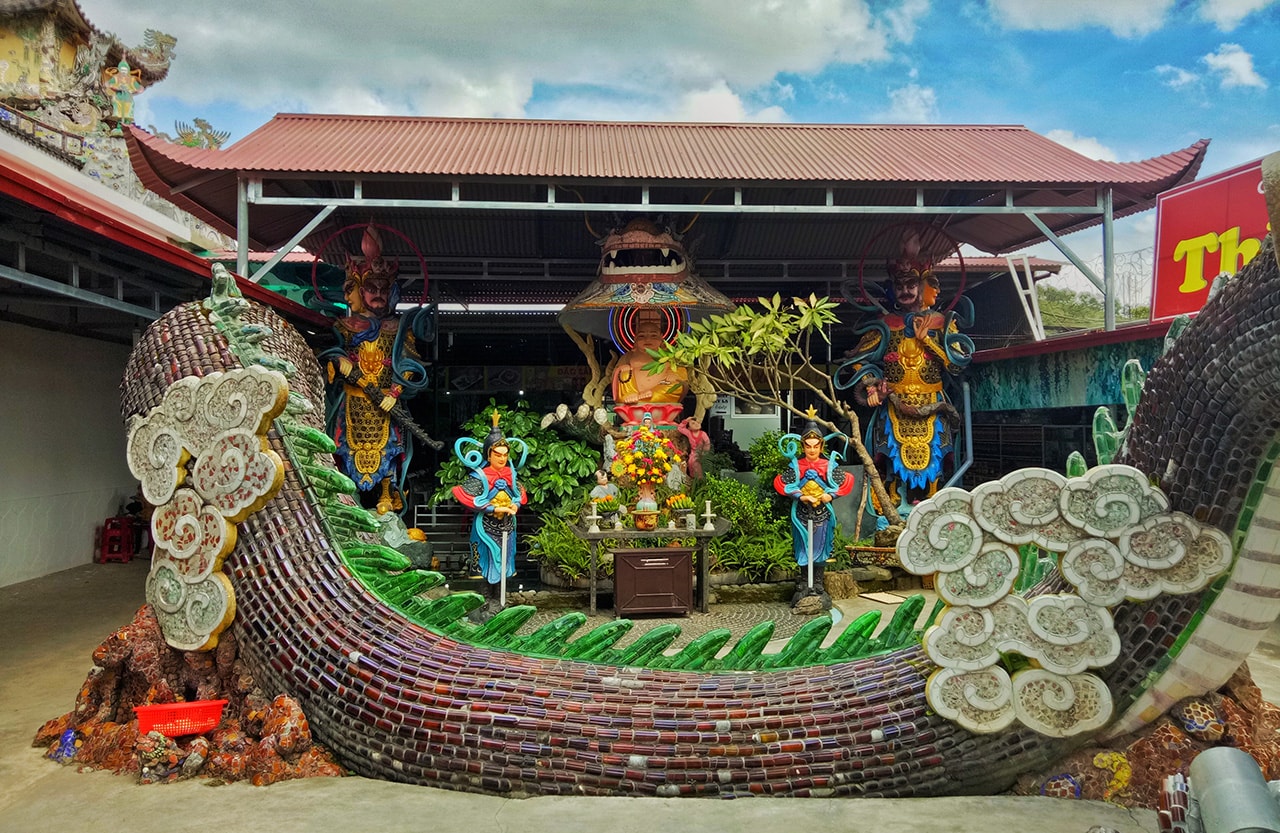 The temple complex itself has a long history. Construction began in 1949 and ended in 1952, which is discouraging. At one glance at the scale, it is difficult to fit in my head, as it was possible to create such magnificent beauty in just three years. And, by the way, it still exists, mostly due to funding from the personal funds of Buddhists and pilgrims. The “material” for construction was collected by the whole country, everything went in the course: tiles, pots, vases.

In Vietnam, it is not customary to throw away broken glass and chinaware, because, as far as we know, there is no manufacture of its own in the country. Hence the value.

So the pagoda and existed until 1990, until it was completely reconstructed, at the same time, set the triple gate. Finding its location has become much easier, and the highest tower can be seen from the main road.

Lin Phuok is located just 8 kilometers from the center of Dalat.

You can visit the pagoda free every day, starting at 8 am and up to 4 pm

Just be sure to take the camera, because such beauty can not be ignored. But you can not take pictures inside the prayer hall. Remember that pilgrims flock here from all over Vietnam and neighboring countries. And for them it is not just a landmark, but a place where praise is offered to the Buddha and you can ask for help in solving problems. So you should respect other people’s traditions and follow the rules when entering the temple, namely, take off your shoes and hats, and cover your shoulders and knees.

In order not to get confused, we offer you a map where the pagoda’s location is clearly shown:

First of all, upon arrival you will find yourself in a parking lot, where you will be greeted with wooden carvings, which will begin your acquaintance with Lin Phuok. If you have a cherished dream, the realization of which occupies thoughts, we advise you to head straight to the highest tower of the complex, which reaches a height of 49 meters. Inside is the largest bell in Vietnam, on the walls of which you should stick a note with a description of the desire and hit it three times. 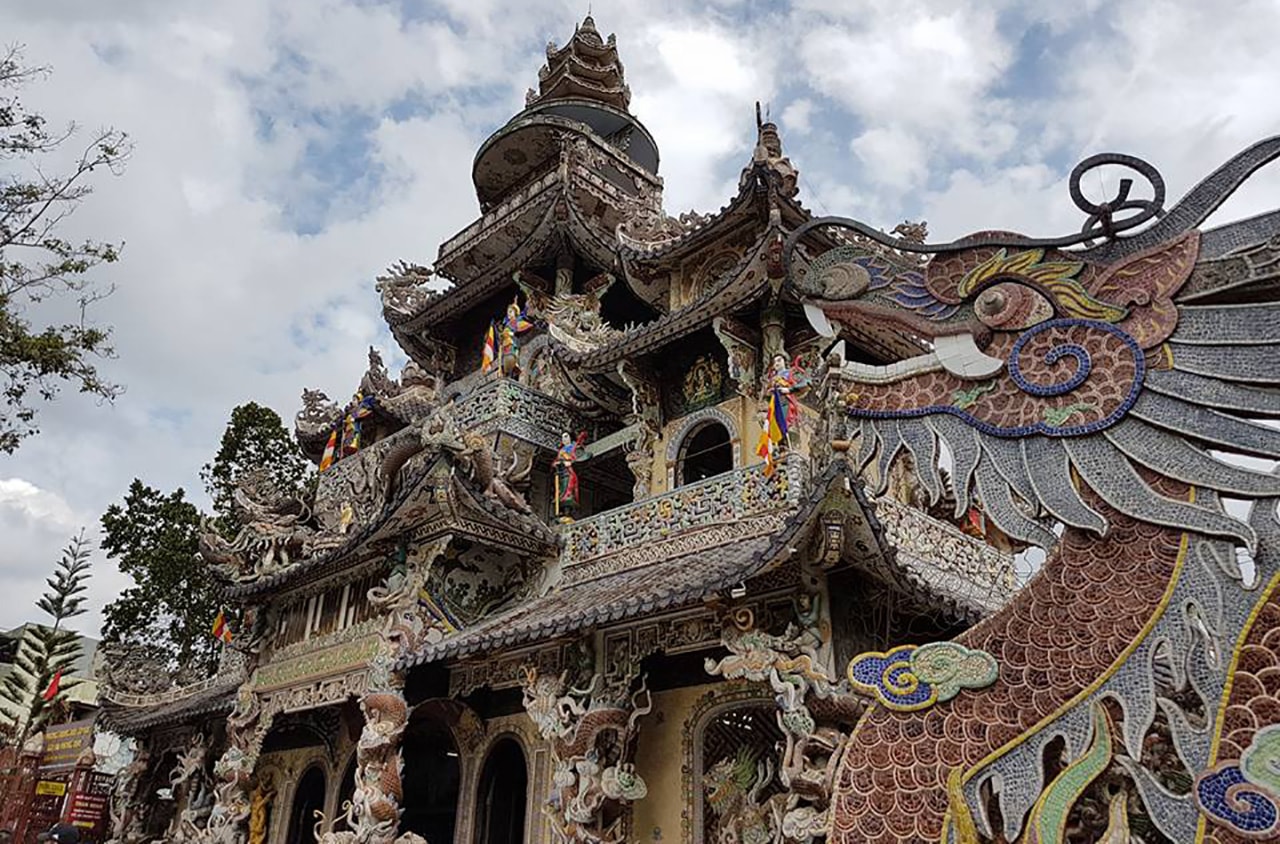 Learn the tower is very easy. It consists of 7 floors, each of which has a balcony, and the base is guarded by lions and a guard. The first thing that catches the eye at the entrance is two deities sitting on the throne, and nearby there is a spiral staircase, which you can reach to the very top. From the height, the head may slightly dizzy, but, most likely, it will be more dizzy from the number of colors, mosaics and beauty that will accompany you all the way. So many bright colors, and everything is intertwined in various patterns, images of dragons, deities. And the mosaic itself shimmers in the sun, enhancing the effect of festivity and magnificence.

On the second floor there is a wish-fulfilling bell, which was mentioned earlier. Its height is 4.5 meters, and its weight is about 10 tons. It is guarded by two guards and suspended on iron supports. Again, write a wish on paper, stick it to the bell and strike it three times. You will see: the execution of what you make, does not keep you waiting.

As you continue up the stairs, you will be accompanied by many statues of Buddha. And if you climb to the top, then reward yourself with a stunning view of the town and its surroundings. 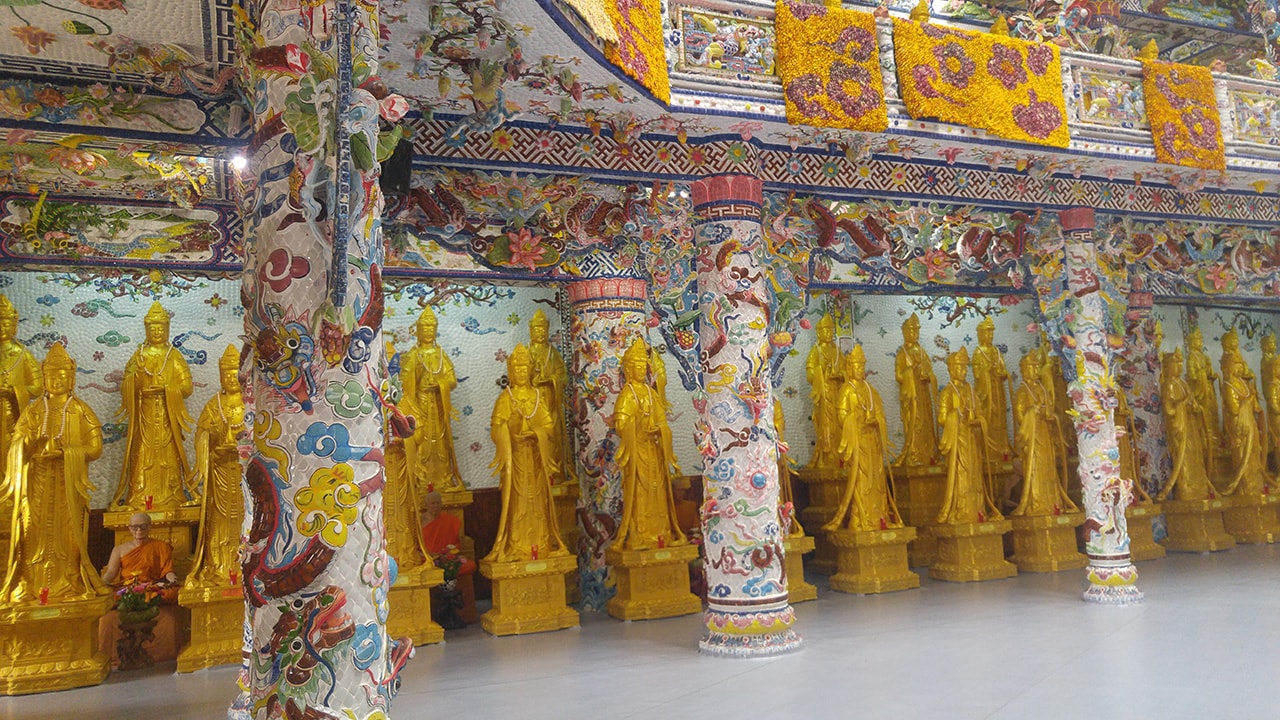 Going down, do not forget to also look into the next building, consisting of four floors, where you will get acquainted with the flower goddess Bodhisattva. It consists entirely of immortelle flowers and is so huge that in order to look at it, you have to turn up your head. Naturally, the Bodhisattva needs a retinue, so around her there are other goddesses, only three meters high. 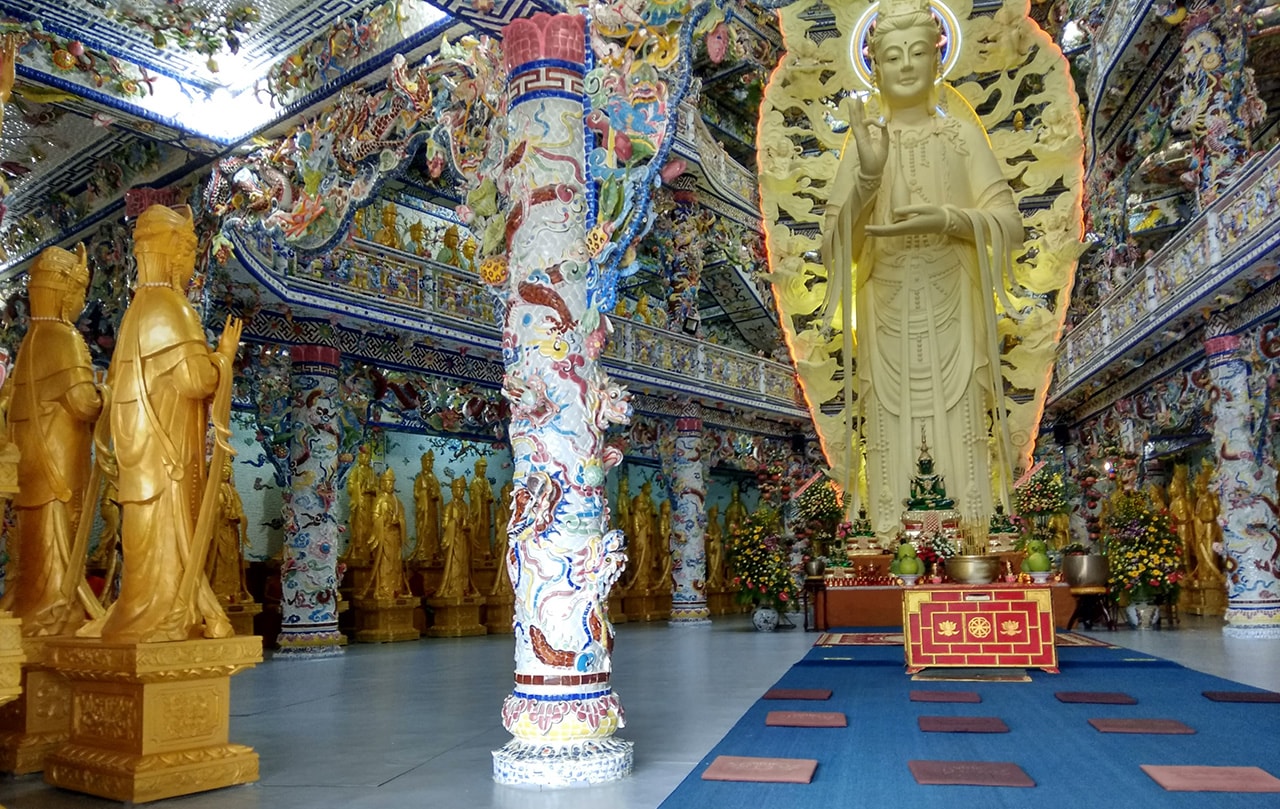 Also in one of the halls, surrounded by subjects, stands a statue of the Buddha himself in white robes. The walls of the hall, like the entire pagoda, are decorated with mosaics, and this never ceases to amaze.

If we go deep into the complex, behind the towers already familiar to us, we will see interesting carved wooden figures, created by local craftsmen from huge whole pieces of wood. If you want to buy something from this, then the idea is quite realistic. By the way, the money from the sale will go to the maintenance of the pagoda. 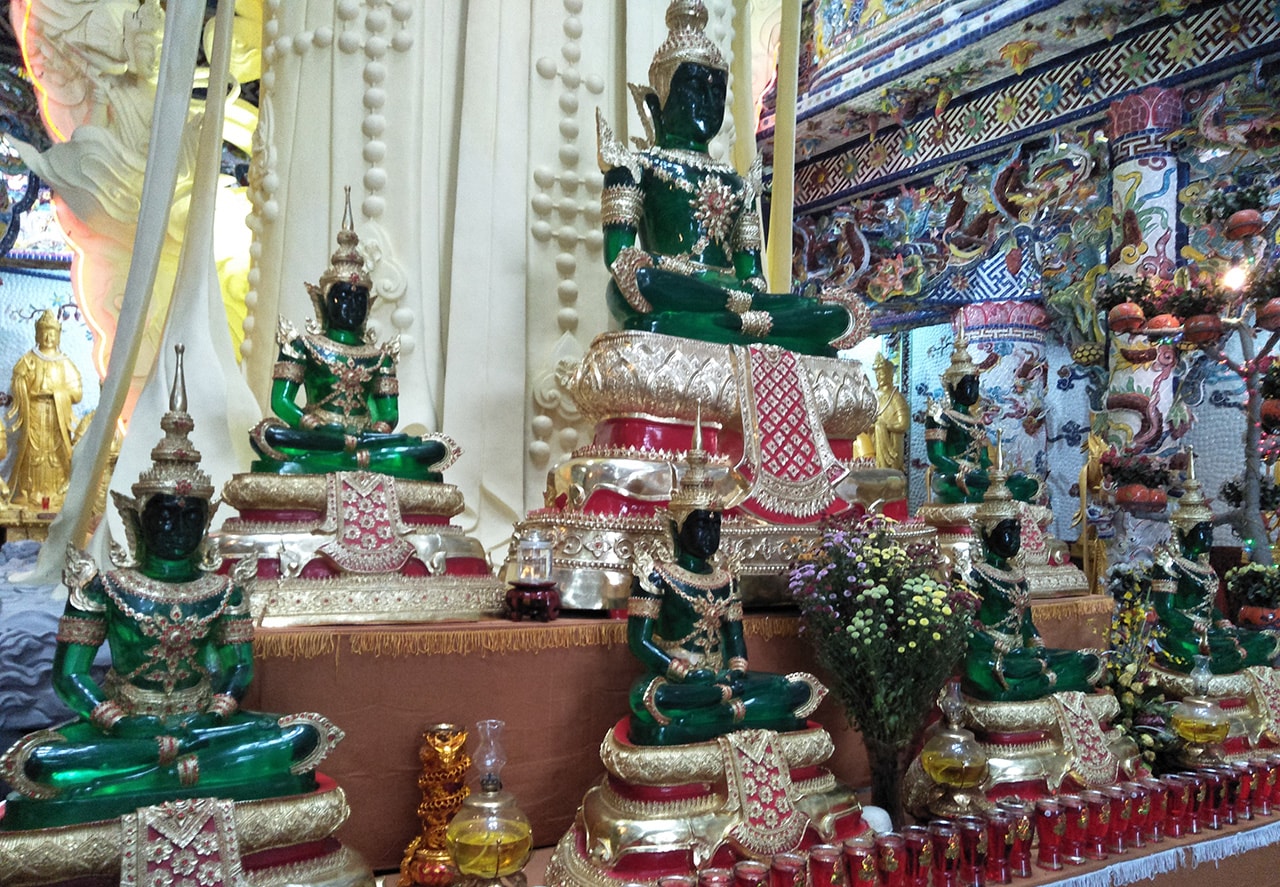 In summary, we want to say that the Linh Phuoc Pagoda is a must-see place if you are in Dalat. So much mosaic, colorful and incredibly beautiful, you can hardly find anywhere else. It is also a great opportunity to touch another religion, a different culture and worldview, to see them from the inside, and not only on the pages of the guidebook.