Decades of communist party rule in Vietnam led to some decline in religion. Yes, and traditional beliefs in this period did not find encouragement at the national level, more precisely, were suppressed and oppressed.

But times change – political foundations change. And today, about a third of the population recognize themselves as adherents of one religion or another, and almost half are also openly guided by traditional beliefs and related customs. So, what religions are common in Vietnam?

The heritage of ancestors – way of life for centuries

Buddhism – the oldest among today’s religious movements of Vietnam., but long before coming to this country, even more ancient traditional beliefs arose here. Their main currents can be called the cult of honoring ancestors (blood and spiritual), as well as the worship of the forces of nature, the elements and fertility. These beliefs contain the foundations of the spirit of the Vietnamese people and their way of life.

Vietnamese people have respect for the older generations, including those who have already left this world. And just older and already deceased relatives decided to show love and respect, it is considered a moral duty and a sign of good education. One should revere the living, showing attention and care, read the deceased — taking care of the burial place, performing special rituals and even maintaining some semblance of communication with deceased relatives.

Long mourning for the dead, the presence of the home altar of the ancestors, where incense is burned and gifts for the deceased are burned, is the norm in Vietnamese everyday life. The late ancestors are considered the real patrons of the descendants living now, and this is not a figurative expression.

It is interesting to know: even some branches of activity have got their own “honorable ancestors”. Ancestors, patrons of arts and crafts are weaving and embroidery, printing and even journalism, in the very state of Vietnam. And they bear the specific names of people who lived centuries ago.

Also traditionally, the Vietnamese worship the spirits of nature, Earth, Sky and Water, the sacred trees, the spirits of the main food culture – rice. In short, everything most important for the daily existence of the people.

Communist ideology proclaimed these beliefs as superstition and forbade it. In 1987, the ban was lifted, which made it possible to practice more openly the centuries-long rituals and customs.

Buddhism is the most significant official religion of the country. Having come here 18 centuries ago, he quickly took the dominant position. This is related by the hundreds of temples and religious buildings that have survived from ancient times. Buddhist priests had a considerable influence on the internal political situation, were the custodians of knowledge and educators. However, the historical realities of the country also had an impact on dogma. This led to the emergence of some of the trends characteristic of Vietnam, both very committed to rituals and the construction of temples, and preaching service to the Buddha directly at work in the field.

Since the middle of the last millennium, Buddhism began to lose ground under the pressure of Christianity, Islam, and some other creeds. But still he retains a leading position among the officially recognized religions in the country. Up to 70% of people call themselves Buddhists or recognize the great influence of this religion on their worldview.

Vietnam did not bypass such significant teachings as Taoism and Confucianism. The latter, preaching order and respect for power, gained greater influence among the educated people — nobles and bureaucrats. Daoism, more prone to mysticism, found its development paths close to the wider population.

The beginning of the 16th century was marked for Vietnam by the appearance of the first Christian, more precisely, Catholic missionaries here. However, the first Catholic missionaries who arrived here in an attempt to increase the influence of Portugal in the newly discovered countries for Europe did not achieve much success. This required a more ideologically and materially stronger platform of the Jesuit church.

The Jesuits opened their first mission in Vietnam in 1615. One of the missionaries, the Frenchman Alexander de Rod, personally converted over 6,000 people to the Catholic faith. He made a significant contribution to the local culture by creating an alphabetic alphabet based on the Latin alphabet instead of hieroglyphic writing that is difficult to learn and use. 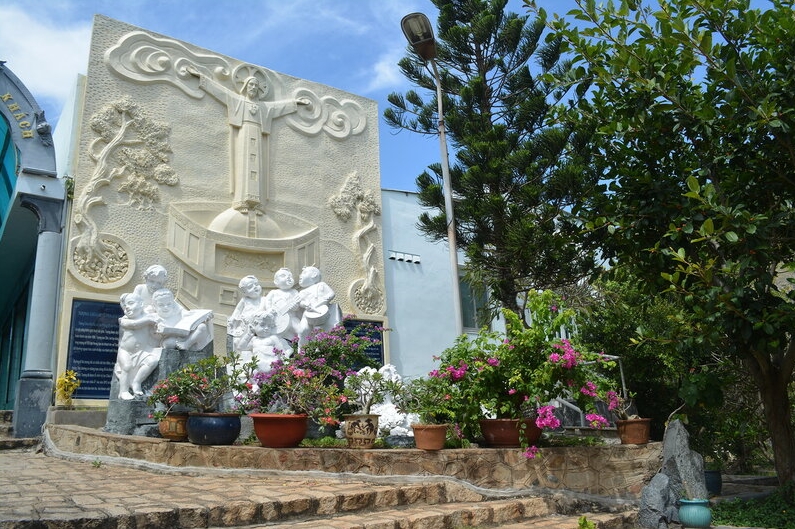 In the 18th century, the position of Catholicism was further strengthened by the efforts of Pierre Pinot de Beuin. He had great support for the offspring of a princely family, who subsequently assumed the imperial title under the name of Gia Long. Pierre Pinot gained great political weight, which he actively used to strengthen the French and Jesuit influence on the emperor and the imperial court.

Catholicism in Vietnam repeatedly strengthened and became the object of repression, including already in the era of communist rule. As a result of these persecutions, many missionaries and Catholics of local origin were killed and were repressed. But today the Catholic Church has 5 million adherents among the Vietnamese living in their historic homeland, and hundreds of thousands beyond its borders.

Catholic Vietnamese willingly acknowledge their religious affiliation, there are 23 Catholic dioceses and 3 metropolises in the country, many churches function.

The Protestant church began a full-fledged missionary activity in Vietnam just a century ago. In 1911, Canadian missionary Robert Jofrey arrived here, followed by hundreds more of his fellow believers in their faith and vocation. The Protestants did not show such activity in interfering in political affairs, their energy was directed, rather, to winning the support of any segments of the population. Now the number of Vietnamese Protestants, according to not quite accurate data, ranges from half a million to a million. Moreover, a significant part of converts belongs to the so-called house churches, which are not officially registered anywhere.

A large-scale surge in the popularity of the Protestant Evangelical Church was already observed at the beginning of the XXI century, with representatives of ethnic minorities predominating among neophytes. In 2007, the state recognized the Mennonite and Baptist areas of Protestantism in the country.

Orthodoxy is the smallest of the Christian churches in Vietnam. It is represented by a single parish in the city of Vung Tau, where several hundred Russian-speaking employees of the joint Russian-Vietnamese oil company and their families, who constitute the majority of the parishioners, live. In terms of Orthodoxy, Vietnam also belongs to the Constantinople Orthodox Church. But more often with visits to various events in Vung Tau and a number of other cities, representatives of the ROC come here.

Christianity as a whole is represented in the country by the largest number of believers after Buddhism. Other confessions, brought from other places and originated here, have significantly fewer adherents.

Hinduism in the country is confessed mainly by the representatives of the Tyam people who inhabited the state of Tampa on the territory of present-day South Vietnam. According to historical sources, Hinduism was brought here by immigrants from India in the 3rd – 4th centuries, forming the core of the future Tyampa. Today, the most beautiful, albeit small, religious and cultural monuments in the Michon Valley tell about the turbulent and restless era of the heyday and fall of the Tyam state. About 50,000 tyams (mostly belonging to the military and priestly castes) and 4,000 descendants from mixed marriages call themselves Hindus today. The Michon Temple Complex is a UNESCO World Heritage Site and is a popular sightseeing destination.

Islam in Vietnam is also professed mainly by the Tamy, but among the local Muslims there are representatives of other nationalities, including immigrants of Indian, Malaysian, and Indonesian origin.

The predominance of tyams and their isolation from the rest of the Islamic world left a special imprint on the Vietnamese variety of this religion. Some of the local Muslims belong to the Sunni teachings. Another – to the bath, softened Tyamskogo version of Islam, in which the Quran is studied in a strongly abbreviated form. The posts exist only for members of the clergy, and in addition, they practice loyalty to Hindu beliefs, participation in their religious holidays and worship of the Mother Goddess, whom Orthodox Muslims do not recognize.

The total number of Vietnamese Muslims is 65,000. In one Ho Chi Minh City operates 16 mosques. The local branch of the Muslim faith is supported by Malaysia and Indonesia, the countries of the Middle East. Working Muslim women dress in a way that is more consistent with accepted concepts. Because closed face and spacious clothes may attract unnecessary attention, create interference in the work.

To some extent, Bahá’ís can be attributed to Muslim dogma, since this belief arose on the basis of the Shi’ite trend in Islam. But by now Islamic authorities have officially called the Bahá’ís a separate religion. It combines the signs of several religious movements and denies the possibility of people knowing the divine essence. In 2009, there were 7,000 worshipers among the Vietnamese.

There are very few followers of Judaism in modern Vietnam, these are a few visitors, contractual specialists of Jewish origin. 100-150 years ago, in the era of French colonial rule, a small Jewish diaspora existed here. After the departure of the French from Indochina, it disappeared completely.

Kaodai is a young but rapidly gaining popularity monotheistic religion that is syncretic. It has signs of several religions, as if assembled from them. Officially it has less than a century (1926, Tay Ninh), but according to various sources, only 2-3 million of its adherents live in Vietnam and some more abroad. Kaodai preaches non-violence, the rejection of animal food, the achievement of reunion with the supreme deity after death.

And ideally, liberation from the wheel of rebirth, which is considered the highest good in Buddhism. Kaodai High Throne – the main temple of religion – is located in the north-west of the country near the Cambodian border. It is distinguished by a bright appearance and an incredibly elegant motley interior. In total, the country has 37 major temples Kaodai.

According to the teachings, the main prophets received from the deity an instruction to prepare the “Third Age of Religious Amnesty.” In general, Kaodai is a peace-loving and loyal religion, canonizing the holy founders of Islam, Taoism, Buddhism, Christianity, the politics of Sun Yat-sen, the writers Victor Hugo and Leo Tolstoy, a number of respected cultural, religious and political figures.

Legislatively on the territory of the Socialist Republic of Vietnam freedom of religion has been proclaimed. This means that any citizen or foreigner residing here has the right to profess a religion that does not conflict with the laws of the state. Or do not profess any. Compared with the atheism that has been planted for several decades, this is a great progress. At least, no one now has the right to condemn and punish for religious affiliation and hinder the administration of rites. However, even in the period of the most categorical ban, beliefs and religions remained relevant for the Vietnamese. This is confirmed by the events of recent years and past decades.

In general, Vietnam is a multi-confessional state, where semi-pagan beliefs in sacred trees and the Mother of Rice coexist with Catholicism adapted in accordance with local realities and newly invented religions. Traditional beliefs are very strong here and are aimed at strengthening moral values ​​and family ties. And the main later religions have somehow learned to peacefully coexist with these customs.