The rainy season in Vietnam is perhaps the only climatic feature of this country that delivers certain inconveniences to both tourists and locals. But we all know the saying: “Be warned is forearmed”.

Who did not dream of being a child in an exotic country, the home of the “trees of life” – coconut palms with healthy and tasty fruits, where the favorable sun and delicious tropical beaches with golden sand, transparent sea with a turquoise glow? Not everything is as rosy as travel agencies are trying to show us, but if you know what to expect, you can minimize the inconvenience.

Just like with Vietnamese New Year Tet, when not a single store is open for the whole week and it turns out to be a surprise for many, in the rainy season there is nothing to worry about if you are ready and treat everything with a bit of positive and humor.

Will a period of precipitation hinder productive rest?

Every year the flow of tourists to this country is increasing, because here the weather allows you to enjoy your holiday on warm sand in the arms of the welcoming sun not only in summer but also in winter. Tropical Vietnam with a lot of bright sunny days a year is a great opportunity for residents of northern countries and cities to spend the winter in a warm, near the sea.

However, it should be remembered that for this country is characterized by a fair amount of precipitation. However, due to the fact that the territory of Vietnam was stretched for a long distance from north to south, the climatic zones are slightly different. So the rainy seasons in different regions of the country do not occur simultaneously. The main thing: to know when and where they start in the period of the year that interests you.

Climatic zones of the country:

Rainfall season in the Central region of Vietnam

In this part of the country should go to vacationers who have planned vacation for the summer. The dry beach period here begins in April and ends in August. And since the end of September it is time for torrential rains, which stretches for the whole autumn, actively capturing December.

Sometimes precipitation is accompanied by piercing winds and squalls, raising large crests of waves to the sea, so it becomes unsafe to swim in it. In October and November – during the peak of the rainy season – powerful and rather dangerous typhoons. Given this, planning a trip to this part of the country is better still not in the “wet” season.

Humidity time in the southern region

Quite heavy rains, accompanied by active gusts of wind, in this part of Vietnam begin to annoy the residents and guests of the country in May and continue their hectic activities through November. In cloudy weather it blows cool outside and, of course, the temperature of the air decreases. But then the petals of strange plants and flowers, rare trees and shrubs, sparkling with transparent raindrops, exude a delicious aroma. And wonderful exotic fruits and berries, full of life-giving moisture, give the guests an incredible enjoyment of their taste and smell.

Many tourists rains in Vietnam scare. But the south of the country provides an excellent holiday almost year-round. There is an opinion that the rains do not stop for days, therefore, without getting wet to the skin, it will not be possible to walk and enjoy the sights. But it is not. Precipitation in the southern part of the country prevails at night. Tropical rains last about half an hour during the day, and it’s quite possible to wait out for a cup of tea at a cafe or take a break at the hotel. And enjoy the contemplation of the interior decoration of ancient religious buildings. In the rest of the time, the weather in the south of Vietnam is delightfully hot and sunny, the air temperature surely keeps at +30 ° C, and the sea breathing with calm, warmed to +28 ° C, attracts swimming.

Season of “tears” in North Vietnam

The dynamic rain period comes to this climatic zone in April and remains until September. It is accompanied by tangible coolness. Not uncommon lowering the temperature to +6 ° C. Therefore, if you do not like “wet” weather, it is better not to come to the north of the Asian country at this time, but to choose a more favorable time for dating, when the rays of the tropical sun warm the air wonderfully. This is October-March.

The rainy season for months in the northern climate zone is characterized by different levels of humidity. For example, in April, the sky “cries” the most active. During the day, the air is heated to 20 ° C, and at night the thermometer drops to +10 ° C. January in the north of Vietnam is the coolest month of the year. However, the entire winter period in this part is quite cold. In mountainous areas, temperature is not uncommon, and in the territory of Sapa – even snow. But it rains less.

Features of the wet season by months

January. In the first month of the year, preference should be given to the southern resorts, where at this time the most warm and comfortable. Planning a trip to the central part is better in the second half of the month.

February. Beach vacation is difficult only in the north. In the resorts in other regions, the rainy season is leaving, giving way to favorable sunny days.

March. Provides guests with a comfortable pastime throughout. Even in the north during the day you can do without warm clothes.

April. The perfect time to travel to fabulous Vietnam. Everywhere is amazingly warm.

May. Excellent rest will be provided at all resorts.

June, July, August. The most favorable weather at this time – in the resorts of Central Vietnam.

September. In the south and in the center – the rainy season. In the north, you can go to the popular beach resort – Catba Island. Here it is just not rainy and warm. However, if short-term precipitation, replaced by a gentle sun and clear sky, will not spoil your resort mood, you can order a ticket to the central part.

October. Pretty bad month for a beach pastime. In the center – bad weather, not unusual typhoons. In the south, the “sputum” season is not over yet, so sudden changes in the weather are possible: either sunny or rainy. In the northern Qutb – grace, the weather is inspiring. A good time for exploring Hanoi, hiking the mountain peaks in Sapa, voyages on Halong Bay.

November. Weather conditions in the north and south are just great, in the center there is a high probability of typhoons.

December. Guests of the country will be warmly welcomed to any resort throughout.

As it is known, Nha Trang is the most popular city among Russian tourists in Vietnam. A huge number of Russians already live in Nha Trang on a permanent basis. More and more tourists come here to relax, and at any time of the year.

The rainy season in Nha Trang begins in October and lasts about 2-3 months – until the end of the year. 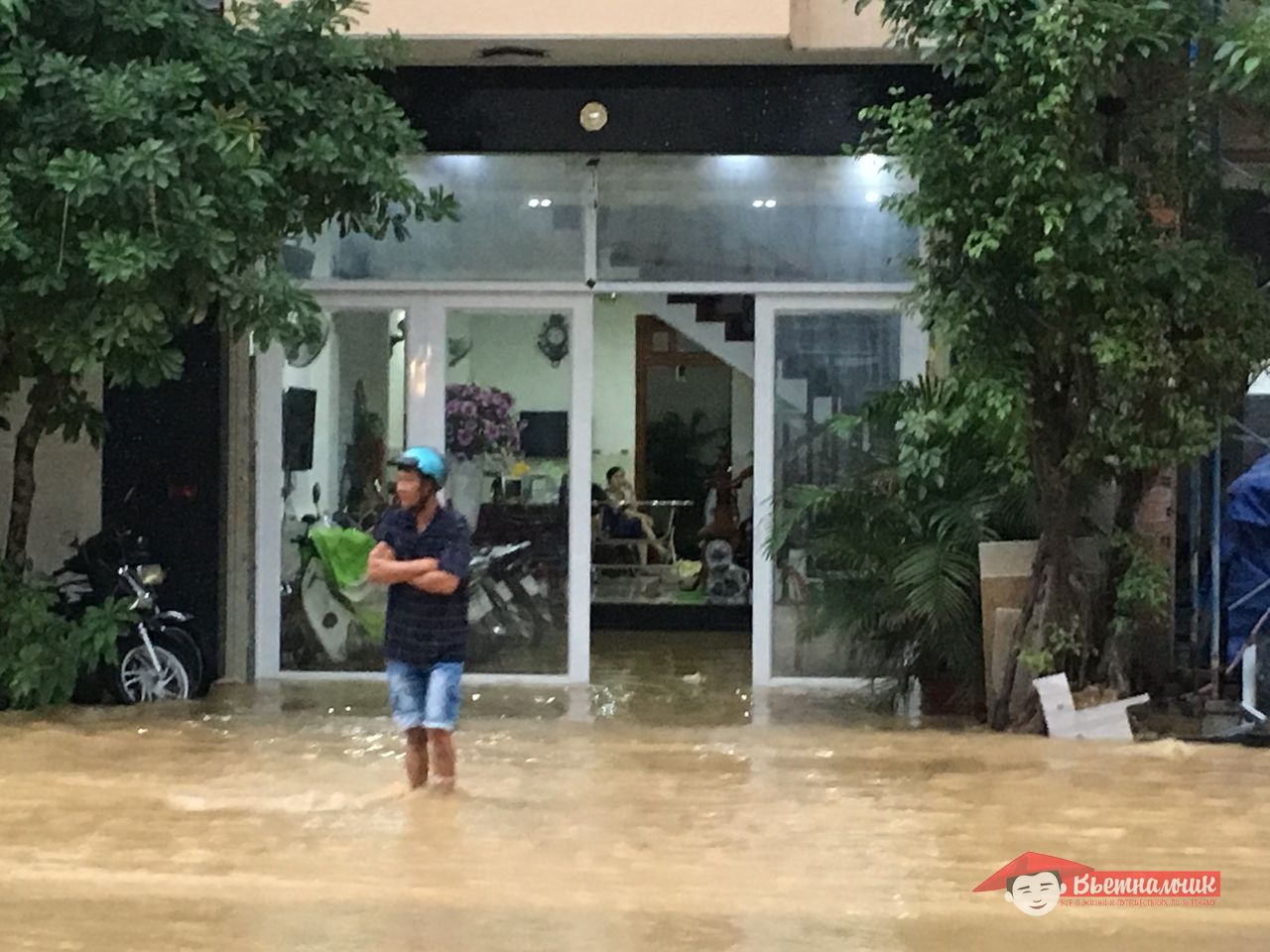 [expert_bq id = 2236] In 2016, we were “lucky” to watch the strongest downpours for several weeks, which almost completely flooded the area shopping center Big C.[/ expert_bq]

Not far from the shopping center, a 5-minute ride on a bike, a small river flows. It instantly turned into a full-flowing river and washed away on that very day the only bridge that affected the inhabitants of the area.

River water very quickly overwhelmed the nearby storm sewer. As a result, literally the entire residential area was flooded. People moved knee-deep in water, and in some places it reached the belt.

It was amazing to watch boats sailing alongside the cars. And half of the bikes immediately stalled, and the owners had to roll them further on foot.

It is logical that the next morning all these bikers lined up near the repair shops.

This is how a shower on a weekday looks like:

How to spend a wonderful holiday

For the duration of the period of precipitation may take up to six months. But this does not mean that the rains do not stop. It happens that the sky does not pour during the week, or even a few.

In any case, if the precipitation does not catastrophically suit you, you can simply move from one city to another. If tropical rains began in the resorts of the central part of the country, you can change the place of rest for cities in the Southern region, then take a trip to the north of Vietnam. Thus, no matter what month you have a vacation, in this country there is always the opportunity to enjoy the beautiful weather and have a great time.

As the hero of the famous film Forrest Gump spoke about Vietnam: “There has always been where to go.”

A modern traveler to choose an interesting route in this wonderful country is not at all difficult.

Practical advice for those traveling to Nha Trang

So, if you still decided to take a chance and bought vouchers to Nha Trang during the rainy season (well, they are much cheaper during this period), then here are some tips that will help you to more easily reschedule this journey and not be upset about the time lost .

This will allow you to safely move around the city and not be afraid to get wet. The raincoats are worth a penny (up to 40,000 dongs), but they help out a lot. Immediately make a reservation that the umbrella will not help here, because the wind will easily turn it inside out, and a biker passing by will spill water from a puddle.

Shoes such as rubber boots or crocs will help to overcome wet areas more easily.

In order not to waste time in vain, you should have 2 lists of places: one for sunny weather and one in case of rain. On a rainy day, you can quickly navigate and choose those places that can be visited, despite the rain outside the window.

We advise you to read the following articles:

We hope that our recommendations will help you. If you already had a similar experience and you know something that we did not mention, we will be happy to discuss your ideas in the comments.