Traveling in Vietnam will be incomplete if you do not visit a unique place – Golden Bridge Golden Bridge, located on the cliff of Mount Ba Na. Tourists call the monumental construction “Touching the sky”, and if you look closely, then it seems that the golden semicircle is supported by someone from above.

Near the resort town of Da Nang, in Ba na hills in the summer of 2018, a huge bridge was built in the form of a golden thread, pulled out of the ground by giant hands. In view of this structure hundreds or even thousands of years. In fact, it was created just a few years ago from steel and glass.

The Golden Bridge is located at an altitude of more than 1,400 m above sea level. Its 8 spans have a length of more than 150 m. At this height, the bridge looks like a silk band that hides in the clouds above Da Nang and lies above the treetops from the edge of deciduous rock.

When tourists are on the bridge, they feel like strolling through the clouds like deities living in the sky. After such a walk, there are memories for a lifetime! Tourists especially loved this bridge for its incredible photos. 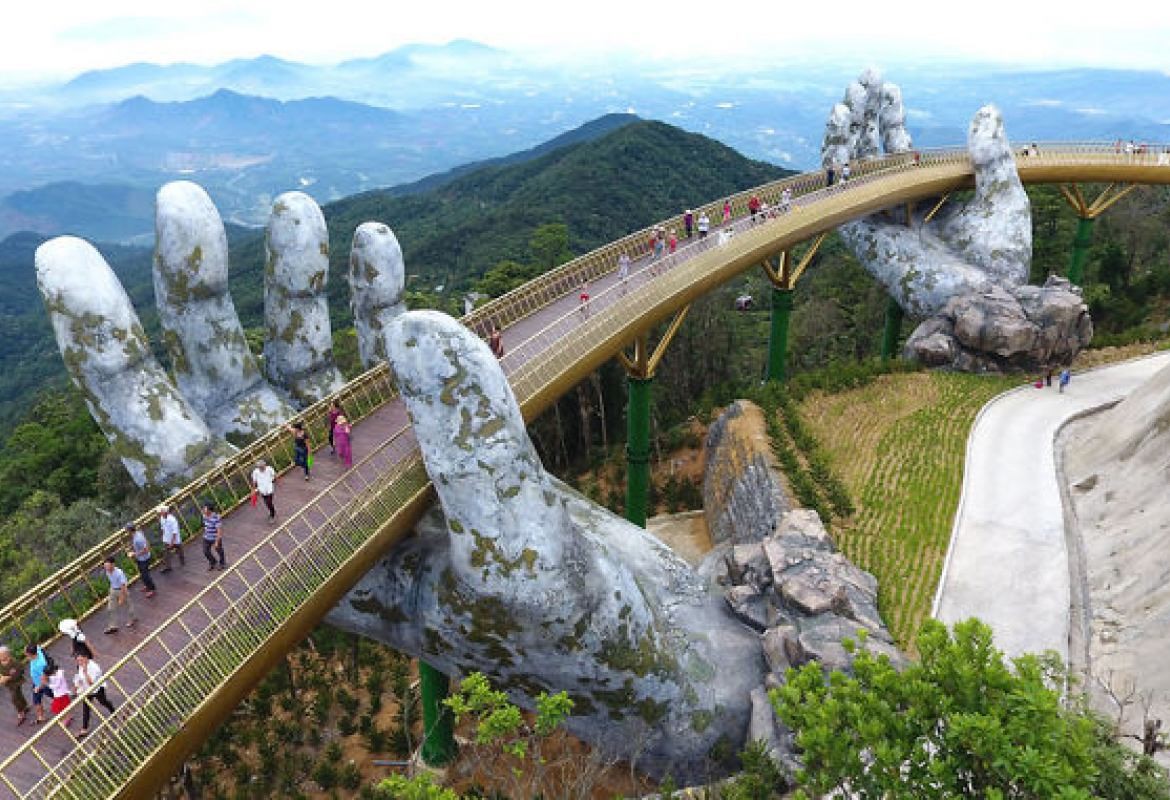 Where is the Golden Bridge

Popular among curious tourists, the Golden Bridge is located next to the city of Da Nang, in the Wa Va mountain range, located in the garden of Tayen Thai Garden near the resort area of ​​Bana Hills. Golden Bridge adorns the east coast of the city, which also attracts travelers with the warm sea and pristine beaches with narrow beaches.

After the opening of the monumental building, the authorities managed to notice a sharp increase in the number of tourists. Most of them seek to make a promenade along the Golden Thread in the hands of God. The first to visit the Golden Bridge were the Vietnamese, but fame quickly spread throughout the world, and more and more curious tourists are coming to Vietnam, in particular, Da Nang. The growth of visitors was influenced by the advertising of the bridge in social networks, images of an architectural masterpiece and travelers’ stories about an incredible monument with gigantic tassels.

Talking about the Golden Bridge, it is impossible not to mention the beautiful city of the country – Da Nang. In addition to the structure described by us, there are other structures that cause guests unprecedented interest and admiration. These include: Marble Mountains, Dragon Bridge, Tuan Phuoc, Chat Ti Lee and others. There are a huge number of them, and each is a masterpiece of architectural art with stunning lighting.

Bana Hills was founded by the French colonialists at the dawn of the 20th century. They lived in villas, of which at that time there were more than two hundred. Now these are abandoned places, and only the dilapidated buildings and ruins remained from the former settlement. To popularize the area among tourists, the local authorities built a small village in the style of the ex-owners – the French and built the Fantasy Amusement Park.

The 150-meter-long bridge was constructed by “TA Landscaping Architect” not so much to attract travelers as to connect with the nearby village. Prior to that, the road was potholes and drops, which created problems for traffic. The cost of the project is about 2 billion dollars, and less than two years passed from the idea of ​​creation to opening. On the perimeter of growing amazing varieties of chrysanthemums, equipped with lavender paths. Visitors to the building have the feeling that huge hands hold the tourist road, although in reality this is just an illusion.

Design and construction of the Golden Bridge

It should be noted that the curved design is designed exclusively for pedestrians. No vehicles can move over the bridge. The length is 150 meters, the width is 5 meters and a 3-meter footpath. The building is located at an altitude of 1500 meters above sea level. Railings golden sights are made of stainless steel, and the flooring of dense and high-quality wood that can withstand heavy loads.

In fact, the bridge is supported by seven supports, only two of which are made in the form of giant arms. When viewed from the side, it seems that someone is pulling them out of the thick of the forest. And they look like they were built thousands of years ago – covered with scratches, damage, cracks, mosses, which gives an archaic look. When creating a design, this goal was pursued. It seems that the bridge is supported by the hands of God himself, who is pulling a long golden string from the depths of the earth. The work was done scrupulously, and the shape of the fingers changed several times for complete accuracy. According to visitors, the Golden Bridge magically and amazingly looks at foggy weather.

If you get from remote Nha Trang, Fukuoka, Mui Ne, it’s best by plane, since the path is not near. Tickets range in price from 50 to 100 US dollars. Flights are carried out several times a day. Vietnamese Airlines: “Vietget”, “Vietnam Airlines” and “Dzhetstar”.

The second way to go to Da Nang – by train, the trip will take up to 20 hours. You can book tickets on the website of the Vietnamese railway lines in advance.

12 hours to get to Da Nang from Nha Trang by bus, The flights are carried out by a number of companies, such as XeNha Travel, on night buses – slip-bass (a kind of “bus reserved seat” where you can stretch out to your full height and sleep all night).

If you are already in Da Nang

The Golden Bridge is located on the territory of the mountain resort Ba Na. You can only visit this place by cable car. Even if you are only interested in the Golden Bridge, and you do not plan to attend everything else on the mountain, you still have to pay for the climb on the cable car and a ticket to the amusement park. This is a must for visiting the Golden Bridge.

The cable car is located 30 km to the west of the city (see map):

It will be much easier to get to the bridge and the Bana mountain with a guided tour from Da Nang. If you want to visit this place yourself, you can take a car (600-700 thousand dongs) or a motorbike for rent (150-250 thousand dongs), as well as call a taxi (approximately 350,000 vnd) and take a map to the Bana cable car station, where there is free parking. The thing is that you cannot go up in your car. In addition, the road to the top is closed. That is why the only option remains – cable car. At the station you can buy a ticket and continue your journey.

The method of climbing the Golden Bridge on the cable car, which is the same landmark, is also unique. For many years, it raises visitors to a height of 1,487 meters and works continuously.

How much is admission

A walk along the bridge and its surroundings is free, but tickets for the cable car must be purchased for money.

The area attracts not only the bridge, there are beautiful parks, a huge, 27 meters high, Buddha statue, entertainment venues, wine cellars and stunningly beautiful gardens.

Please note that the cable car to the bridge is open from 07:00 to 22:00. It works without holidays and weekends.

Comfortable hotels with a different level of service are opened near the Golden Bridge. They can be reached on foot or by transport – the trip does not take much time. There are also guest houses, hostels, apartments and a number of other options for living in comfortable conditions.

Listed and a number of other hotels can be booked in advance. To do this, check the time of arrival and departure, how many rooms are booked, the number of guests (children, including) and the available price range.

According to reviews of visitors and specialists, the best time to visit the Golden Bridge Golden Bridge is spring, summer and autumn. During this period, there is almost no rainfall, the warm wind blows and the bright sun warms.

Such conditions contribute to the flowering of unique plants and allow tourists to spend more time outdoors and see historical and modern sights longer. A great addition to the trip will be a rest on the coast of the sea with the cleanest beaches. The locals greet the guests in a friendly way and create the maximum level of comfort. Indeed, for Vietnam and the Vietnamese, tourism is one of the main sources of income.

Michon Ruins in Da Nang: The Cultural Heritage of the Capital of Tjampa Empire

Ba Na Hills in Danang: a French resort in the mountains of Vietnam

Michon Ruins in Da Nang: The Cultural Heritage of the…

Ba Na Hills in Danang: a French resort in the mountains of…